There’s nothing worse than a smart-alec film fan.

We’ve all done it, of course. Picked apart a cheesy blockbuster for its perceived flaws. Poked holes in some sloppy plot logic. Proposed another ending that would have made oh so much more sense.

The fact is, though, we’re often not as smart as we think we are. Often, films are simply more interested in telling a story than in bulletproofing themselves against pedants.

Sometimes, even widely circulated complaints are totally fatuous. People watch Titanic, for instance, and ask why Leonardo DiCaprio didn’t simply hop on the door alongside Kate Winslet at the end. It’s enough to make you want to scream: “That’s not how buoyancy works!”

But sometimes, plot holes are so egregious that you just can’t let them go. These are the ones that really stick in your mind, and leave you searching for any kind of plausible explanation.

Some of the best films ever made have still been liable to contain a few baffling plot holes, from Citizen Kane to Back to the Future. No matter what defences people conjure up, there’s always some nagging feeling that never quite goes away.

Here are 15 of the biggest plot holes in popular movies…

Frank Darabont’s prison drama features a famous twist, in which it is revealed that the wrongly imprisoned Andy Dufresne (Tim Robbins) has secretly tunnelled out of Shawshank prison, hiding his escape path with a poster of Rita Hayworth. But how did he manage to reattach the bottom of the poster after leaving through it?

In the final act of the 1980s classic The Karate Kid, Daniel LaRusso (Ralph Macchio) bests his rival Johnny Lawrence (Billy Zabka) with a sensational kick to the head. However, it was established at the start of the fight that blows to the head were not allowed, per tournament rules – meaning LaRusso should have been disqualified. It’s a plot hole that was poked fun at in the recent sequel series, Cobra Kai.

Much of the first Toy Story revolves around Buzz Lightyear’s (Tim Allen) refusal to accept that he is, in fact, a children’s toy. If this were the case, though, why would he play dead whenever a human enters the room? It’s a plot hole that has been questioned by fans for years, and no explanation is ever quite satisfactory.

Nineties sci-fi blockbuster Armageddon featured a plot hole so glaring that it was ridiculed by Ben Affleck on the film’s own DVD commentary: with the Earth in dire peril, Nasa decide to train a cadre of drill workers as astronauts, a lengthy, expensive (and, in reality, infeasible) process, rather than just train existing astronauts how to operate the drill. “I asked [director Michael Bay] why it was easier to train oil drillers to become astronauts than it was to train astronauts to become oil drillers,” said Affleck on the commentary. “He told me to shut the f*** up, so that was the end of that talk.”

Back to the Future

Picking holes in Robert Zemeckis’s timeless time-travel romp perhaps goes against the film’s goofy spirit. But it’s hard to get past one lingering quibble: why wouldn’t Marty McFly’s parents notice that their son looked identical to the strange and charismatic teenager who once set them up? Even if you accept that decades have passed since they last saw his face, it’s a stretch to believe that they wouldn’t notice the uncanny similarities.

Lord of the Rings: The Return of the King

Towards the end of Peter Jackson’s nearly 10-hour fantasy trilogy, there comes an almighty deus ex machina, as the forces of good are saved by the arrival of the Great Eagles. But the scene left many viewers asking the question: why couldn’t the Eagles have simply given everyone a lift to Mordor in the first place? The apparent plot hole has spawned endless debates among Middle Earth fanatics, with counter-arguments digging deep into eagle lore to disprove its merits. But the fact remains that for the everyday viewer this was a head-scratchingly simple solution that everyone on screen ignored.

‘People were afraid of it’: Basic Instinct and the scandalous making of a zeitgeist-shifting bonkbuster 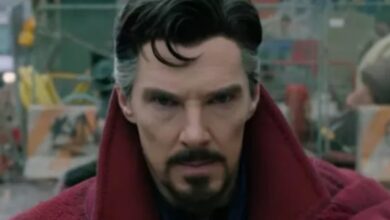