Spoon – Lucifer on the Sofa

By a band’s 10th album, you’d assume there’d have been at least a few misfires. Not from Spoon. Even after the odd lineup change, the Texan band’s work is forever consistent, moving forwards with steady determination. It’s unsurprising, then, to find this stoicism has seeped into the music itself. Lucifer on the Sofa opens with a studio murmur and a tingly, arpeggiating piano sequence, before a sauntering guitar riff kicks in. “For the first time in my life,” croons frontman Britt Daniel, “I let myself be held/ Like a big old baby.” He utters a falsetto whoop, as though barely containing his energy, making the track thrum with tension.

Tension operates on a knife’s edge throughout the record. Its rootsy blues grit has you thinking of gun holsters and twitching fingers; the bass gives an eyelid’s tremor as it narrows towards its target. Characters take off in the dead of night (“The Hardest Cut”), growing disillusioned with modern living (“Wild”). There are subtle nods to Motown and gospel on “The Devil & Mr Jones”, with Daniel playing the sleazy but charismatic preacher to pews of brass and grinding guitars. It’s an album fuelled by southern heat, with plenty of grit to boot. Their best yet. ROC

In a recent interview with The Independent, Frank Turner spoke of how he’s doing his best to be an ally. “If the whole thing that we’re learning about our society, our history and our culture is that voices have been marginalised, then we need to make space for those voices to no longer be marginalised,”he said. “So I try and listen… I want to be an ally. I want to be a constructive listener.”

When it comes to his music, this thoughtfulness has paid off enormously. His new album FTHC (Frank Turner Hardcore), is the English singer-songwriter at his most honest. “I’ve been messed up, stressed out, talking to myself again/ Locked up, left out, terrified of everything/ Wound up, found out, waiting ‘round for something to give,” he hollers on single “Haven’t Been Doing So Well”. You’d think this would make for glum listening, but Turner excels at catharsis, backed as he is by pummelling squalls of guitar and punky percussion.

It’s a magnificent return to form after 2019’s painful No Man’s Land, on which Turner earnestly dealt out songs about the “overlooked” women of history. FTHC proves that Turner has plenty of material from his own life to put into moving songs such as “Miranda”, about him repairing his relationship with his father after she came out as trans. Several songs delve into his former addiction struggles, and how he still tussles with the misplaced sense of freedom – read, “irresponsibility” – he used to get from substance abuse. “I sure do miss cocaine,” he confesses on “Untainted Love”, “the bravado and bloodstains.” Because of course, he knows, it would be wonderful if we could just abandon the everyday anxieties life throws at us. He’s a brave man to admit that. Braver still for learning how to face life head-on. ROC

`You know an Alt-J song when you hear one. Or when you feel one. There is a texture to their sound – a mix of electronic music, indie rock and psychedelic folk – that invokes sensation rather than emotion. It was true of their 2012 Mercury Prize-winning debut An Awesome Wave, and it’s true of their fourth record The Dream 10 years later.

It feels suitable, then, that the album should open with a song inspired by what it’d be like to swim in a pool of Coca Cola. The bubbly guitar riff of “Bane” is driven out by a hypnotic chant before lead singer Joe Newman’s discernibly indiscernible vocals peal in. They’re shaky, as if Newman is gargling a capful of soda. “Chicago” and “Philadelphia” feel like companion tracks, two standout numbers, slow-burning and sublime. The theatricality gleaned in “Chicago” is doubled down on in “Philadelphia”. The ghostly track welcomes an operatic segment into the fold. “U&ME” – a breezy, summertime anthem – is The Dream’s most radio-ready song meaning it sounds the least like Alt-J.

After a wobbly third album (the trio themselves have said 2017’s Relaxer was a bit “rushed” – although it did earn the band their second Mercury award), Alt-J returns to steady ground, which in their vernacular means no ground at all. The Dream sees the band moving briskly through sensations, their heads stuck out the window of a speeding car, tongues wagging, sticking to whatever comes their way. AN 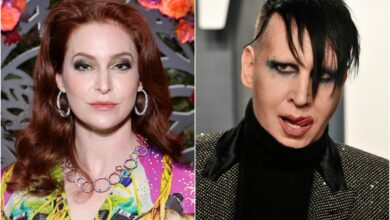 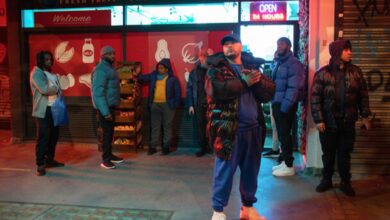 Glastonbury 2022 – live: Kae Tempest performs a blistering set on the Other Stage