There was no doubt that the increasing pressure with the change of the system would expand the ranks of the opposition alliance. It would not come as a surprise that those who left the ruling party also contributed to this expansion. What requires this is the functionality of the democratic system, and the fact that the leaders of the six parties came together to expand the ranks of the opposition alliance should be seen, above all, as an indicator of that functionality. Just as the unlimited democracy exercises within the system paved the way for power, the support of the community is shaped by the picture that emerges after those exercises too. Shortly after the heavy defeat of the ruling Motherland Party in the March 1989 municipal elections, the leader of the second opposition party, Süleyman Demirel, knocked on the door of the leader of the first opposition party, Erdal İnönü, with the following proposal: “If we want to come to power in the first parliamentary elections, we must sign this protocol: whoever will be the first in the election will be supported by the second party to form its government, and a coalition government will be formed.” Exactly 30 months later, Turkey was ruled by a coalition of the True Path Party and the Social Democratic Populist Party. Undoubtedly, the main reason for six party leaders to come together is to cooperate in the elections and democratically remove the 20-year ruling party from power – democracy must exist for this, and the “bus opposition” that Azerbaijan has introduced to world politics literature does not need such things. As a person who has been following Turkish politics for 30 years, I must say that among the leaders of six opposition parties, 81-year-old Temel Karamollaoğlu, who never backed down from the political philosophy and principles of the political worldview he represents despite all the promises, deserves the most credit. Karamollaoğlu’s position reaffirmed that morality is the most important issue in politics. Just as the consensus reached by 81-year-old Karamollaoğlu (Felicity Party) and 44-year-old Gültekin Uysal (Democratic Party) in the opposition alliance is a great achievement of Turkish democracy, Ahmet  Davutoğlu and Ali Babacan’s separation from the AKP and formation of a new party are also bold steps in the positive direction of politics (Although Fazail Aghamali does not like the fact that you are at the different pole today with the leader you were in the same line until yesterday, I hope he will forgive us. All these are the requirements of a democratic policy, and part of the right-wing conservative layer of politics is demanding that former Prime Minister Davutoğlu and former Deputy Prime Minister Babacan, who was in charge of the economy, “go toe to toe with” Mr. Erdoğan in the halls and squares today, and these people meet that demand.). The password that led six party leaders together was “the return from the presidential rule to the parliamentary rule”, and, of course, the first condition for this is to come to power. These days, when the remaining exchange rates of the state-owned banks are mobilized and the exchange rate is kept under pressure, the departure of the Minister of Treasury and Finance to London to borrow money and the departure of the President to Abu Dhabi to find money show that the steps taken after Qatar to soften relations with the United Arab Emirates and Saudi Arabia will continue irreversibly. When the intention to normalize relations with Israel is added to this, it can be assumed that the economy will be able to breathe a sigh of relief in the spring and summer. It is difficult to predict whether the ruling party will take the opportunity to make early parliamentary elections.

Strange as it may seem, the absence of one of the leaders of the pro-Kurdish People’s Democratic Party (HDP), which is currently the third party in parliament, among six opposition leaders (governed by a co-chairing system), does not bother the HDP or the opposition bloc. There are several reasons for this, the first of which is that by presenting the party as an integral part of a terrorist organization, those who run the state and the AKP, especially Mr. Erdoğan, are trying to include other opposition political groups that greet the Kurdish-leaning party in the category of “terrorists”. The HDP is also well aware of this and secretly supports the elections, although it does not appear to be officially close to the opposition bloc – for example, the Kurdish-leaning party had a large number of votes in the June 23, 2019, municipal elections in Istanbul for Ekrem İmamoğlu. Despite President Erdoğan’s direct initiatives, in the current situation, the Kurdish political movement is not close to the ruling party, and although the opposition bloc seems to be far away, in fact, all its accounts are indexed to the election, the address of Kurdish-leaning voters will finally appear when counting the ballots. It will not be a surprise if this electorate turns to the AKP under satisfactory conditions.

There are several reasons why the socialist-minded electorate has not joined the opposition bloc. First, those who run small socialist parties believe that the Turkish population will eventually begin to pay attention to the left, and are therefore trying to increase their numbers. Secondly, given the possibility of joining the opposition bloc and being melted in the big parties there, they think that it is more expedient to stand aside in the current situation…

‘I do not believe this war is in your name’: Boris Johnson speaks Russian in address to its citizens

Adoption, witchcraft and Britain’s most hated woman: The ‘cash for babies’ mum 21 years on 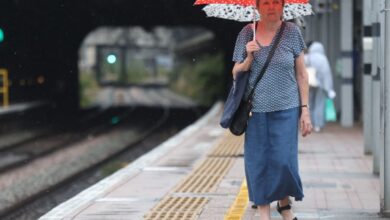