To kick off his recent tour in New York, grunge elder statesman Eddie Vedder opened with a cover of REM’s “Drive”. The 1992 original is a minimalist dirge – but, interpreted by the Pearl Jam frontman, it was reborn as a celebration of his 30 years in music. “Hey kids… Rock’n’roll / Nobody tells you where to go,” sang Vedder in his luxuriant croon, flanked by rumpled folkie Glen Hansard and by cardboard cut-outs of the dancing girls with bowling-pin headdresses from the Coen Brothers’ The Big Lebowksi. Vedder smiled as he warbled, appreciating the irony of the lyrics. As a young man fronting Pearl Jam, he truly had no idea where he was going. But now here he was, 57 years old, on the first night of a tour promoting his forthcoming solo album, Earthling, exulting his status as angst-rock grandmaster.

The contrast with his peers across the Atlantic could not be more pronounced. In the early 1990s, grunge and Britpop represented rival musical visions: one angry, earnest and very American; the other with a peacocking quality, a blatant debt to pop’s past, and a playful irony that was regarded, in the UK at least, as incomprehensible to our US cousins.

In 2021, the gulf is just as stark – but in very different ways. As Vedder strides confidently into his middle years, his Britpop contemporaries have gone from channelling the spirit of the Carry On film franchise to residing in grumpy-old-man purgatory. Noel Gallagher is ranting about face masks; Ian Brown is releasing anti-lockdown anthems; and sometime Blur leader Damon Albarn has been whining about Taylor Swift, one of the great songwriters of her generation. What an about-turn it is: the groovy, gobby Britpoppers have become full-time cranks, while the woebegone grunge generation are the cool dads we’d all like to hang with.

Three decades on, it’s easy to forget just how mutually opposed the two movements were. Starting in 1991 with Nirvana and Nevermind, grunge had carpet-bombed popular culture with impenetrable gloom, and turned tatty plaid shirts into a fashion must-have. And then Britpop cracked open the shutters and thumbed its nose at Americans and their bottomless despair. Battle lines were drawn: either you were scowling along to Kurt Cobain or striking a cheeky pose to the cock-a-hoop new Pulp single – or, slightly later, the latest Oasis terrace chant. “If punk was about getting rid of hippies, then I’m getting rid of grunge,” Damon Albarn said to NME in 1993.

Today, Eddie Vedder isn’t the only grunge warhorse with a spring in his gallop. Look at former Nirvana drummer Dave Grohl, who continues to churn out agreeable Foo Fighters records every 36 months or so while, in his various media appearances, maintaining his permanent beacon of positivity on the cultural landscape. Even Mark Lanegan, one of those brooding antiheroes who blazed brightly only to come hurtling to earth as drug addiction exerted an unyielding gravitational force, has found a new purpose in life as a memoirist, with two gripping autobiographies.

This wasn’t how it was expected to end for grunge. With growling guitars, and lyrics that articulated 50 flavours of self-hate, the genre was not an oeuvre built for happy endings. There were certainly casualties – from Cobain to Alice in Chains’ Layne Staley, to, as recently as 2017, Soundgarden’s Chris Cornell, who died by suicide in his Detroit hotel room. Meanwhile, Billy Corgan, of grunge-adjacent Smashing Pumpkins, was a bit of a whingeing weirdo even in 1993 – and has not softened appreciably since.

In the early 1990s, as the music industry reckoned with Cobain’s death, it was Britpop, rather than grunge, that looked set for a long saunter towards the sunset. Oasis released their debut, Definitely Maybe, six months after the death of the Nirvana frontman. As the chirruping lad-rock of “Live Forever” and “Supersonic” took over, it was easy to imagine Noel Gallagher maturing into the new Paul McCartney. Or to picture Damon Albarn of Blur – whose defining LP, Parklife, came out in April 1994 – ending up an elder statesman of Cheeky Chappie-dom.

The future hasn’t played out quite as expected. Vedder has shrugged off the unease that led him to speak of fame as if it were an unpleasant rash. Nobody was more haunted by success than Pearl Jam after their album, Ten, became a sensation in 1991. “I don’t want to be a star,” Vedder told Kerrang! in October 1993. “It’s not worth it, to have my picture taken and have my face everywhere. It’s scary; it scares me.”

But on Earthling, Vedder appears completely at home with rock royalty status. The LP features cameos from Ringo Starr and Elton John – the sort of establishment figures that grunge regarded as false idols to be torn down. And it is produced by Andrew Watt, hit-whisperer to Post Malone and Miley Cyrus, resulting in an hour or so of rollicking heartland rock that positions Vedder as a Generation X heir to Tom Petty.

Foo Fighters, meanwhile, continue to have a hoot. Later this month, they’ll premiere their new “comedy horror movie” Studio 666, which Grohl describes as “absolutely insane” and in which he and the rest of the band ham up the acting as they record an album in a haunted mansion. It’s like the Nineties never happened. And considering what the Nineties did to Nirvana, maybe that’s no bad thing.

The most surprising trajectory of all, it might be argued, has been that of Mark Lanegan. With his band Screaming Trees, he seemed destined to burn out rather than fade out. Chemical oblivion was his priority, and though his extraordinary singing voice marked him as perhaps the most naturally gifted of the grunge generation, he seemed determined to throw it all away.

But three decades on, Lanegan has written two autobiographies and is living cleanly in County Kerry on the west coast of Ireland. True, life hasn’t been all sweetness and light. In March 2021, he almost died from Covid and spent three weeks in a coma. But clearly he is no longer the shattered figure who prowled through Screaming Trees’s 1996 masterpiece, Dust. When he regained consciousness and found himself in hospital in Tralee, the first thing he did was start chronicling his experiences on his phone. These were expanded into his second memoir, Devil in a Coma, published late last year.

Lanegan has also found time to wage an amusing feud with Liam Gallagher – and has come out with the upper hand. Bad blood had bubbled up between the two when Screaming Trees toured the US with Oasis in 1996 and Gallagher ridiculed the Americans by calling them “Howling Branches”. In Sing Backwards and Weep, Lanegan had his revenge by dismissing Gallagher as “an obvious poser”. He continued: “Liam Gallagher was … a playground bully. Like all bullies, he was … a total pussy.”

As the grungesters have mellowed, so the jolly jesters from the epoch of ironic jingoism and zip-up trackies have come down with a chronic case of disagreeable old geezer syndrome. Liam’s recent solo career is a shameless attempt at recapturing the old glories of early Oasis. He’s a 49-year-old man cosplaying as his 24-year-old self – to the point of holding two gigs this summer at Knebworth, scene of Oasis’s era-defining 1996 shows (ironically, Dave Grohl pops up playing drums on Liam’s new single “Everything’s Electric”). And in September 2020, his estranged brother Noel revealed he had flouted face-mask regulations while shopping. “I choose not to wear one, and if I get the virus it’s on me, it’s not on anyone else,” he said on the Matt Morgan podcast. Gallagher sounded less like one of the greatest British songwriters of recent history than a codger who’d spent too long on Facebook.

Noel did not lack kindred spirits. In the autumn of 2020, with the pandemic at its height, former Stone Roses talisman Ian Brown recorded a song, “Little Seed Big Tree”, that queried the need for a lockdown. “A forced vaccine, like a bad dream / They’ll plant a microchip, every woman, child and man,” he sang. Brown, it turned out, was merely warming up. In March 2021, he stepped down as headliner of the Neighbourhood Weekender in Warrington because of the requirement for a vaccination certificate (mandatory under government guidelines at that time). “I refuse to accept vaccination proof as a condition of entry,” he thundered on Twitter. He was still at it last month, labelling the Covid vaccines that have saved millions of lives “Pfizer poisons”. It’s as if he wants to be ignored.

The degree to which these veterans of British rock have turned increasingly crabby as the decades clip by was underscored last month by Damon Albarn, with his claim that Taylor Swift didn’t write her own songs. While a row about Swift and the authorship of her music is obviously not in the same category as Covid denial, the remarks were nonetheless (justifiably) criticised. Though they were not exactly a thunderbolt from the blue from Albarn. In 2017, he had dismissed Adele, arguably the most influential artist of the age, as “middle of the road”. This is not how you sail into the sunset with your dignity preserved.

Contrast such dinosaur logic with the words of Dave Grohl, who was among the first to recognise Billie Eilish as the future of pop and suggested that her impact on Gen Z was comparable to that of Nirvana and punk on Gen X. “My daughters are obsessed with Billie Eilish,” he told the PollstarLive conference in 2019. “And what I’m seeing happening with my daughters is the same revolution that happened to me at their age.”

Or with the actions of Mark Lanegan, who spent much of his post-Nineties career humbly serving as musical foil for former Belle and Sebastian cellist Isobel Campbell. She wrote most of the songs on the three albums they made together from 2006 to 2010. Lanegan was happy to put himself at Campbell’s disposal, as an instrument for her musical vision.

The paradox is as loud and crashing as the guitar riff at the start of Nirvana’s “Smells Like Teen Spirit”. Vedder and his peers were music’s original angry young brooders. And yet they have aged into thoughtful middle-aged men. An ocean away, it is the former princelings of Britpop, having once splashed in champagne supernovas, who have become crackpots yelling at clouds and ended up antiquated and irrelevant. 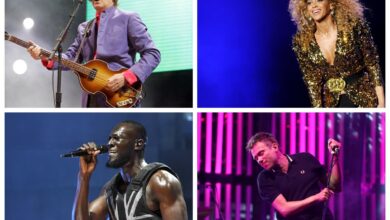 The 22 greatest Glastonbury performances ever, from Kylie to The Cure 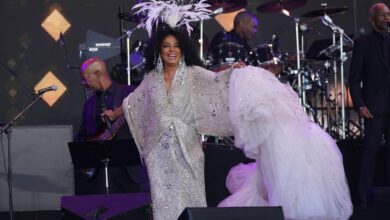