The bird flu virus, which has already killed hundreds of thousands of seabirds around the coast of the UK, has reached islands off Pembrokeshire in South Wales, home to globally important colonies of birds.

On Tuesday the RSPB confirmed “with a heavy heart” that the disease has reached the island of Grassholm, off the southwestern Pembrokeshire coast in Wales

Grassholm is home to 36,000 pairs of northern gannet, making it the third largest colony in the world. It is also close to key breeding sites for puffins, guillemots and razorbills on the islands of Skomer and Skokholm.

Huge numbers of gannets have already been heavily hit by the virus off the north east coast of Scotland, with mass deaths around Shetland, the Firth of Forth and elsewhere, with harrowing photos and videos showing sick and dying birds scattered across colonies and washing up on beaches.

The mass deaths come after highly pathogenic avian influenza, which originated in intensively farmed poultry in China, hit barnacle geese wintering in the Solway Firth last year, with the thousands of deaths reducing the Svalbard colony population by a third.

In recent months there have been reports of widespread deaths of great skua colonies in Shetland, Fair Isle, Orkney, the Western Isles, Handa, the Flannan Isles and St Kilda.

The RSPB’s Martin Fowlie told The Independent: “Over the last five months we’ve just seen an escalation in terms of the numbers and in terms of the geographic spread. Initially it was all concentrated up in north east Scotland and then we’ve seen cases spread south.”

Species including some terns which tested positive for the virus have been found dead on nature reserves in Essex and Kent.

This week the RSPB reported that Coquet Island, off the coast of Northumberland, has now suffered significant losses or rare roseate terns due to the disease. Latest estimations are a 54 per cent death rate in adult Roseate terns.

The RSPB’s site manager for the island Paul Morrison said: “This is the most devastating thing to have to deal with. I’ve never seen anything like this in my life. There are simply thousands of dead birds among the vegetation, wherever you look.

But the species which seems to have been hit the hardest is the great skua. Some colonies are seeing up to 80 per cent of adults die.

“The UK has 60 per cent of all the world’s great skuas, so it’s a real concern for the continuation of the species,” Mr Fowlie said.

“They are long-lived birds which only successfully raises a couple of chicks in its lifetime which gets to breeding age. Knocking out a huge number of adults could have an absolutely devastating effect on them.”

The RSPB did not yet know the risk to birds of prey such as white-tailed eagles, which have been the subject of several reintroduction projects, but Mr Fowlie said “we’ve seen a few individuals found dead and have had tests showing bird flu in their system”.

Speaking about the risk to puffins, which are in rapid global decline due to the climate crisis and overfishing of food, including sandeels, which are commonly used in pet food, Mr Fowlie said adult puffins appear not to be badly affected by the virus so far, with only a few deaths reported.

However deaths of pufflings – baby puffins – have noticeably risen.

The arrival of the virus late in the summer means its impact this season has likely been curtailed, but it is still “a major worry” for the future of the colonies.

The RSPB said media coverage of the worsening spread of the virus has been consistent, but said the government must take action.

“The Scottish and Welsh governments are responding,” Mr Fowlie said. “But Defra are really not doing much at all and have sort of washed their hands of the thing saying there’s nothing that can be done.” 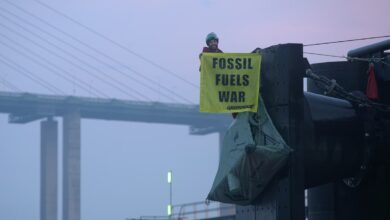