Birds native to the European continent are on average less colourful now than observed 15 years ago, according to a new study that suggests the climate crisis could be behind the change in colouration.

Researchers, including those from the University of the Basque Country in Spain, assessed two populations of blue tits in the south of France, one located on the outskirts of Montpellier and the other in the northwest of the island of Corsica over a 15-year period from 2005 to 2019.

They gathered over 5,800 observations on several characteristics of the blue tits, including its striking colouring – the bird has a blue crest and a yellow breast.

The results, published recently in the journal The American Naturalist, showed a decrease in both populations of blue and yellow colouration between 2005 and 2019, meaning the blue crests and yellow breasts of blue tits in these two populations are on average less colourful right now than when research began.

“Our work suggests that environmental changes, and specifically climate change, could be the main reason why birds such as the blue tit are undergoing a change in their physical features, more specifically in the brightness and intensity of their colouration,” said David López-Idiáquez, a co-author of the study.

“A negative trend in terms of brightness and intensity of plumage colouration in both sexes and populations has been observed, although in Corsica this change is more associated with climate,” he explained.

The change in plumage colour could be the result of a combination of a rise in temperature (1.23C) and a fall in rainfall (0.64mm), “so climate change would be the potential cause of this difference,” scientists explained.

The change in plumage may have an effect on the “mating patterns” of the species, researchers said.

“In these birds, traits such as colouring function as signals to indicate to other individuals the quality of the specimen, which are decisive, for example, when it comes to breeding,” explained Dr López-Idiáquez.

Animal populations respond to variation in their region broadly in one of four ways.

The third, according to researchers, is to migrate and the last is to disappear.

“It is important to stress that this change is not genetic but plastic, one of the ways of adapting to new environmental conditions,” Dr López-Idiáquez said.

“Given that our environment is quite similar, albeit less hot, our birds may be undergoing the same change,” he added.

Researchers call for long-term studies to understand the effects of the climate crisis on ecosystems.

“Overall, this study suggests that ornamental colorations could become less conspicuous because of warming, revealing climate change effects on sexual and social ornaments and calling for further research on the proximate mechanisms behind these effects,” scientists wrote in the study.

Petrol tanker washes up on beach in South African floods 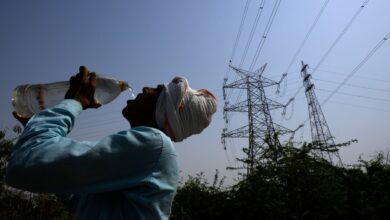