Boris Johnson is being allowed to read evidence gathered about him by the inquiry into the No 10 parties before answering police questions, a leaked letter reveals.

Sue Gray has granted permission to everyone under investigation – all Downing Street staff and the prime minister – limited access to notes taken about them by her inquiry.

The letter, seen by ITV News, says she is allowing the access “as an exceptional measure”, pointing to the “particular circumstances surrounding this set of events”.

Dated 17 February, it reads: “I appreciate that this is a worrying time for those affected by this process, which I do not wish to compound,” ITV said.

The move – revealed ahead of Friday night’s deadline for Mr Johnson to submit his legal questionnaire – means he and all those under investigation will know what information the police hold on them, before responding.

It raises questions about whether, if an individual learns there is nothing incriminating in the notes on them, they will volunteer any additional information to the Met.

Mr Johnson is believed to be working in Downing Street today, ahead of flying to the Munich security conference on Saturday to deliver a speech on Russia’s threat to Ukraine.

Ms Gray has set strict conditions on the access allowed, including that it must be “with a member of the investigation team present” and be “time limited”.

“You will, in line with the process for investigations of this kind and in keeping with the interview process, not be allowed to bring any legal representative with you.” ITV said she has written.

“You will not be permitted to bring phones, tablets, computers or any other recording equipment into the room with you.

“You will not be permitted to challenge, suggest changes or amendments to the notes or otherwise challenge their contents.” 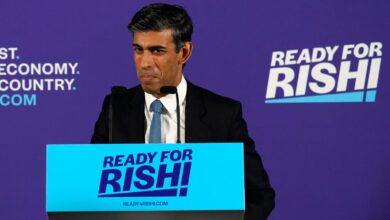 Tory leadership: What are the candidates’ voting records? From Brexit to LGBT rights

‘It’s too expensive to eat lunch and feed my children’: The rise of the school food bank