Boris Johnson broke lockdown laws and has “shredded” the UK’s reputation over the Partygate scandal, John Major has warned – telling The Independent that Tory MPs may have to rise up to oust him.

In a blistering attack, the prime minister was accused of inventing “unbelievable” excuses to obscure his clear flouting of Covid rules, shattering trust in British democracy at home and abroad.

Sir John insisted “deliberate lies to parliament have been fatal to political careers – and must always be so”, making clear Mr Johnson must quit or be forced out, if he misled the Commons.

And he put Tory MPs on notice to “put country before party”, if necessary, even to the extent of joining forces with opposition MPs if the crisis ends in a Commons vote of confidence.

The warning of a “shredded” reputation dogged Mr Johnson on a trip to Poland to warn of Russia’s threat to Ukraine – where he called it “demonstrably untrue”, while ducking questions about the police probe into No 10 parties.

In further evidence of his inability to escape the scandal, a cabinet minister admitted more damaging photos of parties are likely to be leaked in the coming days – as Dominic Cummings has predicted.

Speaking in London, Sir John attacked Mr Johnson over the parties and both weak cabinet ministers and the cabinet secretary for failing to stand up to his rule-breaking.

“At No 10, the prime minister and officials broke lockdown laws. Brazen excuses were dreamed up. Day after day the public was asked to believe the unbelievable,” he said.

Questioned by The Independent, the former Conservative prime minister said Tory MPs may have to side with opposition parties, if Mr Johnson is found to have lied – but has survived a confidence vote of his own MPs.

“I hope Conservative MPs would always put country before party, in all circumstances,” he said, when asked about a confidence vote on the Commons floor.

The intervention came as Tory MPs still await the full Sue Gray report and the conclusion of the Met investigation, before deciding whether to demand a party no-confidence vote.

The prime minister’s problems deepened when the police sent out 50 questionnaires to individuals believed to have broken rules at the parties – including to him, it is believed.

A flustered Mr Johnson refused to say whether he had received a letter, or whether he will resign if he is fined by police, in a series of difficult interviews in Brussels and Warsaw.

“You are going to hear all in due time on that matter,” the prime minister said, on receiving a Met questionnaire, adding: “I will have more to say on all that when the process is complete.”

Ben Wallace, the defence secretary, told Times Radio: “Yes, there could be a photograph tomorrow, the next day or the day after – that’s clearly what’s behind some of the people’s motives.”

In a wide-ranging attack, speaking to the Institute for Government, Sir John also:

* Appeared to blame Mr Johnson for the hounding of Keir Starmer over the Jimmy Savile smear – saying: “Lies can become accepted as fact, as the speaker has pointed out.”

* Attacked the Borders Bill for introducing four-year jail terms for asylum seekers reaching the UK by an “unsanctioned route” – calling it “punishment without compassion”. 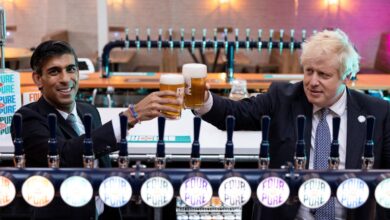 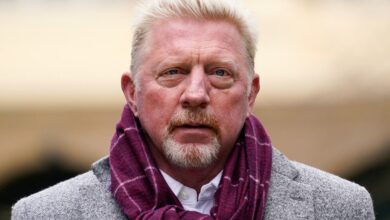