The “minister for international development” has been handed eight other jobs, prompting protests that Boris Johnson has broken his promise to protect the UK’s aid effort.

When the Department for International Development (Dfid) was controversially axed in 2020, the prime minister pledged that overseas aid would remain “at the beating heart” of policy-making.

But a new list of ministerial responsibilities reveals James Cleverly has been given a daunting list of tasks to combine with spending to help the world’s most desperate people.

The minister of state – not cabinet minister, as before – must also manage relations with the United States and Canada, Europe, Gibraltar and the troublespots of Russia and Iran.

On top of that, he is responsible for national security, “defence and international security” and the tortured negations with the EU over the Brexit trade deal and the Northern Ireland Protocol.

The aid organisation Bond questioned how the “merged” Foreign, Commonwealth and Development Office can manage such a vast portfolio when it is “one minister short”.

“We need a dedicated minister for international development, with a seat in the cabinet, to drive the UK’s development priorities and ensure that marginalised communities around the world are not neglected,” said Simon Starling, Bond’s director of policy.

Sarah Champion, chair of the Commons international development committee, said: “We were told this wasn’t a hostile takeover and the government’s commitment to ending global poverty was absolute.

“Sadly, this is looking like another broken promise, one with devastating consequences to both the poorest in the world, and our international standing.”

In June 2020, Mr Johnson faced down criticism from three former prime ministers to scrap Dfid, telling MPs: “This move is about placing our world-class aid programme at the beating heart of our foreign policy decision making.”

Claiming it would ensure “our impact abroad is bigger than the sum of its parts”, he claimed: “Far from diminishing our ambitions, it will elevate them.”

The government then broke a manifesto pledge by forcing through £4bn-a-year cuts to overseas aid spending, a reduction – from 0.7 to 0.5 per cent of national income – that will not be restored until 2024 at the earliest.

It will only be reversed if, in two years, the government is no longer borrowing money for day-to-day spending and underlying debt is falling as a percentage of national income.

The cut came back to bite Mr Johnson at the Cop26 climate summit in Glasgow, when the UK was accused of undermining it claims of leadership on tackling the climate emergency.

Setting out his Budget last October, the chancellor Rishi Sunak said “forecasts show that we are scheduled to return to 0.7 per cent in 2024-25 – before the end of the parliament”. 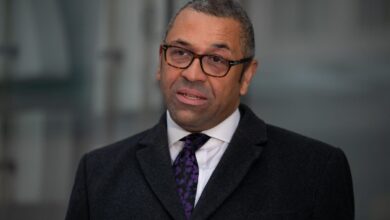 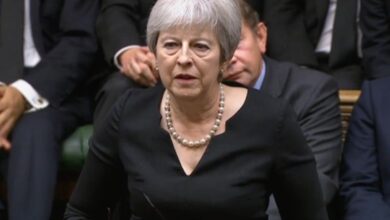 Theresa May predicts Tories can win the next general election