A cabinet split over UK-China relations has deepened after it emerged the prime minister is seeking to boost trade with the economic superpower.

Boris Johnson and chancellor Rishi Sunak are looking to form what sources close to them describe as a more pragmatic and balanced approach to ties with Beijing.

The tone adopted by No 10 and 11 is at odds with what some cabinet figures view as a mounting threat to British security from the world’s second-largest economy.

Foreign and business secretaries Liz Truss and Kwasi Kwarteng are among those in the cabinet who The Independent understands favour a more guarded approach which reduces the UK’s economic dependence on China.

One minister said Mr Johnson’s appetite to attract more inward investment from China was “completely at odds” with broader efforts to strengthen links with Australia and other members of the so-called Five Eyes network of intelligence-sharing nations.

They said reinvigorating trade talks “sends the wrong message” when Chinese economic coercion is a clear threat, as demonstrated by Lithuania recently. The eastern European nation suffered economic pain after breaking with diplomatic custom by agreeing that the Taiwanese office in Vilnius would bear the name Taiwan instead of Chinese Taipei.

The minister also pointed to increasing evidence of closer collaboration between Russia and China on policy towards the US and Nato allies. They claimed that several senior Tories had previously believed the prime minister’s former chief of staff Dan Rosenfield had been behind No 10’s desire to take a more open approach to China. Several senior Conservatives had linked the advisor to Mr Johnson’s warning not to “pitchfork away” Chinese investment.

Mr Rosenfield worked for George Osborne as his principal private secretary and was associated with the former chancellor’s so-called “golden age” policy drive to attract Chinese investment. But the instruction to revive informal trade talks had clearly come from the prime minister himself, according to the minister and, separately, a senior government official. No 10 did not deny this when approached for comment by The Independent.

A source close to Mr Sunak said they did not believe there had been a shift in the chancellor’s stance and referred to the “mature and balanced relationship” he laid out in a speech at Mansion House in July last year. Treasury officials, however, said there had been a concerted effort in recent months to revive discussions in areas such as financial services.

The move to reboot talks, first reported by Politico, was met with criticism from senior Tory MPs, including Tom Tugendhat, the chair of the Commons’ Foreign Affairs Committee, and the party’s former leader, Ian Duncan Smith, who pointed to evidence of China’s human rights abuses and brutal crackdown on peaceful protesters.

Two people familiar with Mr Kwarteng’s thinking told The Independent the business secretary did not believe it was the right moment to seek fresh investment from China. A separate source close to Mr Kwarteng noted his tough stance on Chinese investment in critical national infrastructure – particularly nuclear power. They also noted interventions from the business department to block the Chinese purchase of British companies with sensitive intellectual property and technologies, including a graphene manufacturer last year.

The business department is still in negotiations with French energy company EDF over how to handle its partnership with Chinese state-owned CGN Group, which has a 20 per cent stake in the £20bn Sizewell C nuclear project in Suffolk. The Independent understands Sizewell C is unlikely to go ahead with Chinese involvement. The nuclear energy financing bill currently going through parliament is specifically designed to “to reduce our reliance on hostile states”, they added.

The signs of deepening divides in the cabinet over China come as Mr Johnson seeks support from his backbenchers over the Partygate scandal. On Friday, Downing Street confirmed the prime minister had received a questionnaire as part of the Metropolitan Police investigation into lockdown parties.

A government spokesperson said: “As an open economy, we welcome foreign trade and investment, including from China, where it supports UK growth and jobs – but we will not accept investments which could compromise our national security.” 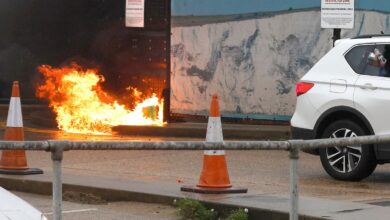