Police say there are “multiple fatalities” after a gunman opened fire on a Walmart store in Chesapeake, Virginia late last night.

More than 40 emergency vehicles rushed to the scene on Battlefield Boulevard after a 911 call was made shortly after 10.10 pm local time on Tuesday.

A police spokesperson says officers are still combing the site of the shooting but believe a single perpetrator is now dead.

Asked how many victims were involved, a police spokesperson said there were multiple people wounded and “less than 10 dead” as of a short while ago.

Louise Lucas, a Virginia senator, said the Walmart that was attacked fell within her constituency, and that she was “heartbroken” by the news emerging from Chesapeake.

“I am absolutely heartbroken that America’s latest mass shooting took place in a Walmart in my district in Chesapeake, Virginia tonight,” she wrote on Twitter.

“I will not rest until we find the solutions to end this gun violence epidemic in our country that has taken so many lives.”

‘We are lucky to be alive’: Residents of Kyiv face reality of war as frontline approaches ever closer 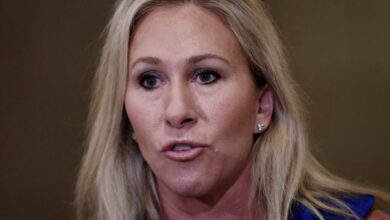