Daniel Craig has recalled a “very funny” joke that the Queen once made to him in private.

The James Bond star met the Queen when they filmed a funny sketch together for the 2012 Olympics held in London.

Craig opened up about the details of their meeting during an appearance on The Late Show on Wednesday (16 February).

He said that the 95-year-old is “very funny, wants to crack a joke, and crack a joke about me”.

He added: “We were having our photograph taken, and she just went, ‘Oh no, he’s the one that doesn’t smile.’”

Host Stephen Colbert asked Craig what the Queen’s pet corgis were like.

“I was rolling around on the floor with them most of the time,” said the actor. “I mean, they’re just there. I think they have their own footmen. They’re very friendly.”

In December 2021, Craig was awarded the Order of Saint Michael and Saint George in the New Year’s Honours List, an honour typically given to diplomats and spies.

It is the same honour given to his character James Bond, whom he played since 2006 until last year’s No Time to Die.

The honour bestowed on Craig recognises service in a foreign country, or in relation to foreign and Commonwealth affairs, such as the work of diplomats overseas.

The fictional spy has a CMG in Ian Fleming’s books as well as their film adaptations. 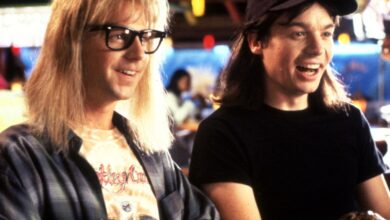 Schwing! How Wayne’s World went from an SNL skit to a cultural phenomenon

David Quantick: ‘A good romcom is about sparring’

Jurassic Park didn’t need even one sequel – five is lunacy