James Crosbie has been jailed for at least 28 years after stabbing his neighbour to death over motorbike noise.

Dean Allsop, 41, was stabbed 17 times last year in Primrose Crescent, Norwich, while his partner Louise Newell was among three others also knifed in the attack. The father-of-three died at the scene.

Crosbie admitted manslaughter by reason of diminished responsibility but denied murder. Crosbie was also found guilty of wounding Ms Newell and friend and neighbour Kerryn Johnson, who tried to stop the attack, but was cleared of two counts of attempted murder.

Judge Anthony Bate, sentencing at Norwich Crown Court, told Crosbie: “I regard you as a very dangerous man.”

He sentenced Crosbie to life in prison with a minimum term of 28 years, which is the amount of time he must serve behind bars before he can be considered for release.

The balding defendant stared straight ahead throughout Wednesday’s sentence hearing, bouncing his left knee up and down, and he showed no reaction as he was led to the cells.

His partner Ms Newell said in a victim impact statement read to the court by prosecutor Andrew Jackson: “I will never forgive Crosbie for what he did to my family.”

Crosbie was convicted in 2018 of criminal damage and possessing a knife over an incident when he threatened Mr Allsop with a knife and hammer after Mr Allsop put some rubbish in his wheelie bin, Mr Jackson said.

The barrister said Crosbie had made threats, to his supervising probation officer, to kill Mr Allsop while he was serving a suspended sentence for the 2018 offences.

Mr Jackson said there “can be no dispute” that at the time of the murder Crosbie was “suffering from a mental disability”, which was described by a psychiatrist as a “delusional disorder”.

He said it did “not extinguish” the defendant’s culpability. Mr Jackson said Crosbie said he had drunk around a bottle and a half of wine before the killing.

In a statement released through police, Ms Newell said she “cannot put into words how this has affected our whole family”.

“My children have lost their hero and I have lost my chosen person – the person I chose to spend my life with,” she said.

“Our lives will never be the same without Dean, but we will continue to keep his memory alive.”

During the trial, the court heard Mr Allsop was stabbed multiple times after his son Mikey revved the engine of a motorbike they had been working on just after 8.15pm on 14 April. 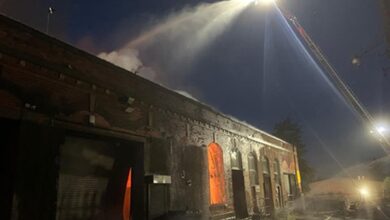 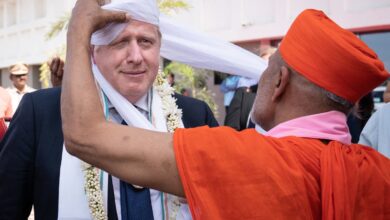