Falling for Christmas, Netflix’s latest festive film, features almost as much falling as it does Christmas. As rich girl Sierra (Lindsay Lohan) is proposed to atop a snowy mountain, she slips backwards on her skis and tumbles off a steep ledge. It’s the kind of fall that should lead to years of rehabilitation, if not actual death, but in the Christmas Movie Cinematic Universe, results only in Sierra not being able to remember who she is. She falls again throughout the film, somersaulting back over an armchair, when startled by a raccoon at the window of the humble mountain lodge she’s been rescued to by Hot Local Dad Jake (Glee’s Chord Overstreet). You think they’d try and make all these pratfalls look good, yet the stunt work, as with the film, never does.

Combine the random raccoon, shoddy slapstick and excruciating Netflix product placement, and Falling for Christmas is one unmitigated mess. Oh, and it’s also the perfect Christmas film. Journalist Jonathan Dean tweeted: “Watched the new Lindsay Lohan – Falling for Christmas. Appalling. Nobody in the film wants to be in the film. Terribly directed, no idea how to tell a story. S*** story anyway. Baffling prop decisions. Acting subhuman. Highly recommend. Haven’t laughed like that for years. 5/5.”

As The Independent’s resident expert on cringeworthy Christmas films (see here), I understand the appeal of a Netflix festive romcom. There are the fun ones (A Christmas Prince), the cool ones (Holidate) and the WTF-did-I-just-watch ones (A Knight Before Christmas). Falling for Christmas sits somewhere in the middle. It’s not trying to push the boat out in any way (as with most Christmas romcoms, it’s aggressively hetero), the dialogue is stilted and the supporting characters are paper (snowflake)-thin. It’s a Christmas cavalcade of clichés: spoilt heiresses, dead mums and dodgy CGI.

But for all its faults, Falling for Christmas has one special thing: the Lohan factor. We’ve watched the actor go from child stardom to tabloid furore, court appearances and addiction issues. There’s a huge amount of goodwill towards Lohan – we want to see her happy, and doing what she was once good at, again. The film, with Sierra’s red hair and Mean Girls Easter eggs, seems determined to play on that nostalgia. It may not be an Oscar-winning performance from Lohan (frankly, I think Saoirse Ronan would struggle to make script this weak look good), but it’s best not to treat Netflix romcoms too critically. Falling for Christmas is like that eponymous fall: horrific in theory, but amusingly slapstick and fun if you roll with it.

‘I’ve never met anyone like Will Smith’: Emancipation director Antoine Fuqua on his slavery drama and the Oscars fallout 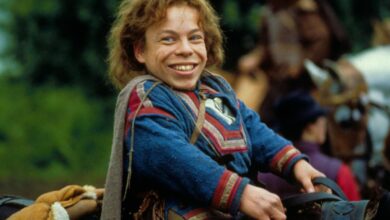 Tolkien knock-off or a secret classic? The story of Willow