Beside a vast waterfall, a woman dangles precariously from a frozen cliff face. As the wind whips around her, she leaps and drives a golden spike into the ice. When she looks up, towards the camera, we know in an instant that she will be alright from the look on her CGI-smoothed visage. There is no danger, because nothing here is real. The only place our new hero looks likely to fall is deep into the uncanny valley.

The trailer for Amazon’s much-anticipated new series The Lord of the Rings: The Rings of Power hit screens during the Super Bowl this weekend, giving fans an early glimpse at exactly what the world’s first billion dollar television show looks like. The answer? A cut scene from an old Final Fantasy computer game. It is hard to conjure up a sense of jeopardy when your characters, in this case Swedish-born Welsh actor Morfydd Clark’s young Galadriel, have ended up looking like one of Mark Zuckerberg’s creepy, dead-eyed Meta avatars wrapped in a billowing cloak of special effects. Sure, royal elves aren’t necessarily supposed to look human, but you’d think after spending all that money she’d at least look like she has a pulse.

Complaints about the overuse of soulless CGI are nothing new. They’re not even new to the The Lord of the Rings universe. In 2014 Viggo Mortensen, who played Aragorn in all three of Peter Jackson’s adaptations of Tolkien’s 1954 fantasy masterpiece, lamented the fact that the director increasingly relied on CGI rather than practical effects. “In the first movie, yes, there’s Rivendell, and Mordor, but there’s sort of an organic quality to it, actors acting with each other, and real landscapes; it’s grittier,” Mortensen told The Telegraph. “The second movie already started ballooning, for my taste, and then by the third one, there were a lot of special effects. It was grandiose and all that, but whatever was subtle in the first movie gradually got lost in the second and third. Now with The Hobbit… it’s like that to the power of 10.”

This September, having evidently learned absolutely nothing from Mortensen’s critique, we’re all going to get the chance to see what CGI to the power of a billion dollars looks like, with filmmaker JA Bayona directing the first two episodes. Amazon have seen fit to spend that mind-boggling amount on a prequel series written by the guys who did a first draft of Star Trek Beyond and inspired by everyone’s favourite part of the original novel: the sprawling appendices at the back. For that outlay, they’re hoping to have a Game of Thrones-sized hit on their hands, or at the very least a big enough success to outshine HBO’s Game of Thrones-prequel House of the Dragon, which is also set to premiere later this year. The scale of Amazon’s spending is a sign that this is something of a pet project for boss Jeff Bezos. “He is personally a huge fan of Tolkien and incredibly passionate about all of it and very well-versed,” Jennifer Salke, head of Amazon Studios, told Vanity Fair this month. “His desire to be ambitious – and for us to be ambitious with our content – has always been clear from the moment I got here.”

Clearly, that sentiment is supposed to reassure Tolkien fans that the new series will do justice to the author’s legacy, but all that talk of striving ambition makes it sound suspiciously like the inflated price tag is really just yet another willy-waving exercise from the man who brought us a wildly phallic space rocket. Lest we forget, the show’s billion dollar budget was directly generated by a business which pays its workers poverty wages, saw them pee in bottles during shifts, and suggests they keep working even as a tornado literally destroys their workplace. What better way for Bezos to spend those ill-gotten gains than on a grandiose parable about the dangers that come with great power?

If Bezos is really that much of a Tolkien fan, he’s no doubt familiar with the author’s own gorgeous illustrations of his imagined Middle Earth. These picturesque drawings and watercolours, in tandem with his novels, define the “Tolkienesque” aesthetic. When the series arrives, fans will be hoping to see more of that and less of the bland CGI and generic action sequences presented in the trailer. There’s one illustration in particular that Bezos might feel a kinship with. In “Conversations with Smaug”, Tolkien drew the “unassessably wealthy” dragon curled atop the vast mound of gold and jewels he guards so jealously, joylessly hoarding wealth while impoverishing those around him. It’s the part Bezos was born to play. No CGI required. 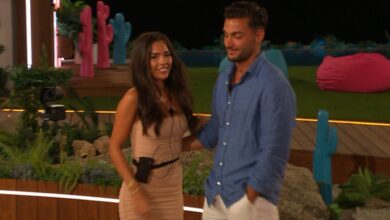 Love Island review: Is Gemma is already getting the ick for Davide? 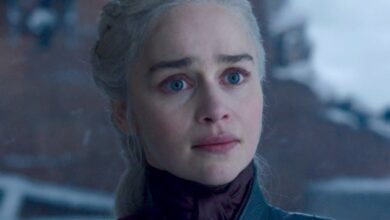 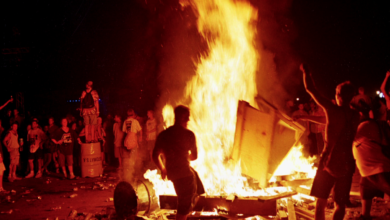 Woodstock ’99: The disturbing true story behind the disastrous music festival