When Kim Kardashian filed for divorce from Kanye West in February 2021, it didn’t curtail one of the most important aspects of their relationship: Kim acting as Kanye’s muse.

In the first episode of The Kardashians, which drops on Hulu and Disney+ this week, Kim revealed that Kanye told her he wanted to “just quit everything and dedicate his life to being my stylist”. “Kanye and I remain friends,” Kim explained in the episode, which was filmed in October last year. “Kanye’s always dressed me, Kanye’s always styled me.”

Kim added that Kanye would send her “random emails” in the early 2000s with looks of what her style should be. “He would send me so many reference pictures, so that’s always really been our thing. But there’s also a side of me that really wants total independence too,” she added.

Kim and Kanye finalised their divorce in March this year, and through Kim’s subsequent red carpet appearances, it seems clear that she has started to claim back her own style. She started out as a celebrity stylist after all.

Back in 2006, when she was better known as a “celebrity stylist” to the likes of Paris Hilton, Kim began making multiple red carpet appearances.

The then-25-year-old attended the likes of the ​​Rock & Republic Spring Collection Party in jeans with matching white boots, a white bag and a white waist belt. Her dress choices were very on trend for the era, with knee-high boots, glittery eyeshadow, and dropped waistlines.

Keeping Up With The Kardashians first premiered in October 2007, and Kim spent the year gracing fashion shows and store openings in Los Angeles.

It was also the year that Gossip Girl first aired, and it seems Kim drew inspiration from the headband-pioneering characters with her thick Alice band and bracelets she wore to the opening of the Melrose Place Diesel store in May 2007.

We also got a glimpse of what would soon be her trademark style, when she wore a figure-hugging dress to the Badgley Mischka swimwear fashion show in July that year.

Kim brought back her penchant for all-white accessories during the 2008 Sundance Film Festival, with her white handbag matching her white knee-high boots.

She also donned an incredibly of-the-era outfit to an MTV gig in March that year, with boot-leg jeans, a long white singlet, and black button-up vest.

Kim attended the Grammy Awards for the first time in 2009, where she played red carpet host for E!

“My silver-white organza dress was by Toni Maticevski and I paired it with Christian Louboutin silver heels. Mario Dedivanovic did my makeup—soft pink lips and lush lashes. I love how the entire look came together.”

Later in September, Kim visited London during a press junket and gave us some iconic pictures of her walking past phone booths in a bubble skirt, wide waist belt, and a beret.

Kim was, famously, married for 72 days in 2011. Humphries proposed in May that year and the pair wed in August – an event that was filmed as part of a four-hour E! special. However, Kim filed for divorce on 31 October citing irreconcilable differences. 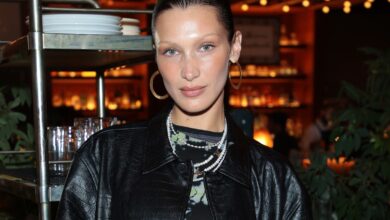 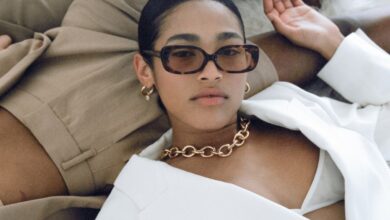 9 small fashion brands to know and support this season