Fuel protests set to erupt across the country on Friday are threatening to wreak havoc on Britain’s major roads.

Southwest England is likely to be hit with some of the worst blockages, with Avon and Somerset Police today warning motorists that “slow-moving roadblocks” are planned on parts of the M4, M5, M32 and A38.

Meanwhile, an image posted on the Facebook group Fuel Price Stand Against Tax suggests demonstrations will be held “nationwide”, including in Birmingham, Cardiff, Liverpool, London and Manchester.

Superintendent Tony Blatchford of Avon and Somerset Police said: “Our protest liaison team has been engaging with the organiser so we can inform the public of the likely disruption and help to minimise it.

“Nevertheless, drivers can expect journey times will likely be longer than normal, especially on motorways, which often tend to be at their busiest at this time of year.

“We advise motorists to consider any alternative travel plans available and ensure they are suitably prepared in case they are delayed.”

It comes after protests against the soaring cost of fuel flared up on the M4 on 4 July, which led to the arrest of 12 individuals.

Friday’s action in the southwest will see vehicles travel north on the M5 between Bridgwater and the Almondsbury Interchange from around 8.45am, before heading eastwards along the M4 and to Junction 1 of the M32.

The force said that the convoy is expected to leave the motorway and stop “for a period of time” before completing the same route in reverse, arriving back in Bridgwater “in the early afternoon”.

A second group of protesters are planning to drive slowly to the Shell petrol station in Bristol Road, Gloucester.

“They are expected to block the forecourt during the morning,” police say.

In a second instalment of the travel chaos gripping the nation this week, AaTube line will begin closing during the evening rush hour on Thursday due to staff shortages.

Train operator Greater Anglia said the Central line “will be shutting down from 5pm today with complete closure by 6.30pm expected”.

Services on the line – which stretches from Epping, Essex to West Ruislip, west London via the centre of the capital – normally run until after midnight.

Greater Anglia serves the London Liverpool Street and Stratford stations, which are also on the Central line.

Transport for London has not issued an alert to passengers, but a spokesman confirmed to the PA news agency the line is closing early due to a shortage of control room staff. 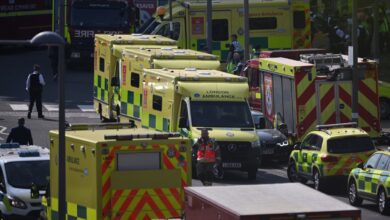