A fugitive who threatened a woman with an axe and stole her £25,000 watch before fleeing to Spain has been jailed for 10 years.

Mark Toth was part of a moped gang who worked together to restrain and rob a woman in Chelsea in November 2019.

The 37-year-old robber, from Kensington, London, dragged his victim to the ground in a headlock and tried to strangle her while removing her watch as witnesses looked on.

The victim, a woman in her fifties, was not seriously injured but her watch, a Daytona model Rolex, has not been recovered.

Toth is the last of three men to be jailed over the incident.

One was arrested on the day of the robbery after attempting to move a car that officers knew was linked to the suspects. Another was arrested eight days later.

The pair were jailed in May 2020, prompting Toth to flee to Spain.

He was arrested on 25 February when he returned to Britain for a funeral.

Police spotted him in photos posted on social media and caught him at a hotel in Hanger Lane, London.

On arrest, he screamed “I’m unarmed” and when police entered the hotel room with a swipe key provided by staff, he unsuccessfully attempted to break his phone in half before being put in handcuffs.

He was sentenced at Isleworth Crown Court on Friday after admitting conspiracy to commit robbery and remaining unlawfully at large at a hearing on 1 April.

Detective Constable Peta Lundgren, who led the investigation, said: “This man has at last been jailed for this terrifying robbery.

“The three suspects were quickly identified and two of them were arrested soon after the attack.

“However, Toth although identified, evaded police by going on the run and fleeing the country following the news of their arrests.

“This sentence should serve as a warning to anyone concerned in serious criminality, we will investigate and will use every tool to find you and bring you to justice.

“We would again like to thank the victim for her cooperation during the investigation, and acknowledge her courage and bravery.” 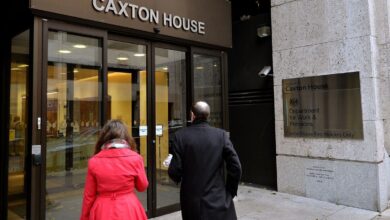