The government’s pledge to make public transport the “natural first choice” is under scrutiny after new statistics showed that car journeys have almost recovered to pre-pandemic levels, while train and bus use is lagging far behind.

For the first week of February, the number of car journeys in England had returned to 92 per cent of their pre-pandemic levels, according to analysis of government figures by Labour. In contrast, rail and bus journeys have yet to follow suit, returning to 53 per cent and 74 per cent respectively of their pre-Covid levels.

Urban authorities have warned that this gulf will further widen after March, once the government’s pandemic funding support for public transport is cut.

The Department for Transport (DfT) made the pledge at the onset of the pandemic, in April 2020, as part of plans to decarbonise the UK’s transport system.

“The reality is, the Tories are delivering a crisis,” said Ms Haigh. “They’ve slashed investment in bus services and next month plan to clobber rail passengers with another brutal fare hike.

“The government is turning its back on its commitments to achieving net zero, it’s frankly astonishing that they’re pushing people back into their cars because public transport simply isn’t available.”

The analysis comes after the government slashed funding for its ‘bus back better’ strategy, with £3 billion originally set to be invested into transforming and expanding bus infrastructure in deprived areas of England as part of the “levelling up” agenda.

Now, according to a DfT letter obtained by the Observer, the project’s budget has been cut to just £1.4bn for the next three years.

The Local Government Association Labour said that all 79 local transport authorities had already submitted bids to secure funding from the DfT, totalling more than £7bn – five times the figure committed by the government to this project, or third the cost of London’s Crossrail.

A source from the Department for Levelling Up, Housing and Communities (DLUHC) said improving public transport and access to large urban hubs across the poorest parts of England was vital to driving forward the government’s pledge to “levelling up” the country.

“There are no quick fixes for the government, but it could make public transport (PT) cheaper and more reliable to try and incentivise use, but that takes time and money,” the source said. “[But] HMT is reluctant to spend as it can’t measure the positive but less tangible outputs [of improving transport.]”

In London, the use of the tube and bus was up to 61 per cent and 75 per cent of pre-pandemic levels in the first week of February, according to the Labour analysis – figures that changed little since the start of the month.

The DLUHC source, a former DfT official, said public transport use – both in and outside the capital – will “remain subdued for a while” as many people are continuing to work from home on a regular basis.

Improving transport links between towns and cities across the Midlands and north of England – and making them affordable – would expand the labour pool for these regions and drive productivity, helping to push forward the government’s “levelling up” agenda, the source said.

The Urban Transport Group, the UK’s network of city region transport authorities, said the “car-led recovery” from Covid-19 was a concern, bringing with it congestion, climate and pollution.

“[Covid] funding for bus and light rail runs out at the end of March and bus operators are already cutting services,”said Jonathan Bray, director for the group.

“Unless we see an extension of funding support beyond March we will see much larger cuts in bus networks and more people switching to the car. 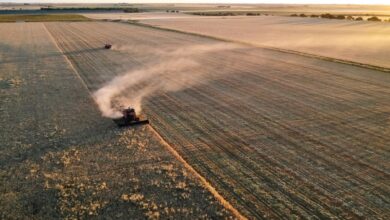 Climate crisis and agriculture halve insect populations in some countries