A swimmer has been killed off a beach in Sydney in the city’s first shark-related death in almost 60 years.

Emergency services were called at around 4.35pm to Little Bay Beach, in Sydney’s east where police, paramedics and surf lifesavers found human remains in the water.

A New South Wales Ambulance spokeswoman said: “Unfortunately, this person had suffered catastrophic injuries and there was nothing paramedics could do”.

Fisherman Kris Linto told Nine News the shark “attacked [the victim] vertically” adding that he “heard a yell and then turned around. [The splash] looked like a car just landed in the water”.

A witness who spoke to ABC said the attack lasted several seconds after the swimmer was pulled under by the shark.

“He was yelling at first, and then when he went down there were so many splashes,” they said.

Randwick council mayor, Dylan Parker, told the Guardian that the community “is just shocked by this horrific incident”.

He said: “Our thoughts go out to the family involved. This is a beautiful community. The coast is our life around here.”

NSW Department of Primary Industries will be working with the police to investigate the circumstances around the death, and report will be prepared for the Coroner.

A spokesperson from the department extended condolences to the victim’s family and said: “DPI will continue to work with NSW Police and Surf Life Saving NSW to monitor the area and provide any technical advice and resources if required, including deploying SMART drumlines in the area.”

As well as Little Bay beach, several other Sydney beaches will close on Thursday while police continue to search the area. 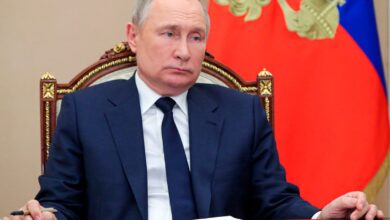 Where does the US get its oil from – and what will happen to gas prices amid Russian invasion of Ukraine?