A total number of 49 Chinese warplanes entered Taiwan’s air defence on Friday, as tensions continued to boil following the visit of Nancy Pelosi to the island.

Taiwan’s defence ministry said it subsequently scrambled jets to chase off the Chinese aircraft in its air defence zone, according to Reuters.

All 49 of the Chinese jets crossed the Taiwan Strait median line, the ministry said in a statement, as part of the latest military drills ordered by Beijing in the wake of the Pelosi visit.

The ministry called the exercise a “highly provocative act” which followed China’s excessive show of military force on Thursday, when the country fired missiles close to the island.

“As of 11am, multiple batches of Chinese warplanes and warships conducted exercises around the Taiwan Strait and crossed the median line of the strait,” said the ministry.

“This Chinese military exercise, whether it be the launch of ballistic missiles or the deliberate crossing of the median line of the strait, is a highly provocative act.”

Her visit sparked backlash from China as the country considers Taiwan a breakaway province which will eventually be united with the mainland once again.

Before the visit, Beijing had issued repeated warnings and threatened serious consequences if Ms Pelosi went to Taiwan.

The US has no diplomatic relations with Taiwan and formally recognises Beijing’s one-China policy.

It, however, supplies arms to Taipei under the Taiwan Relations Act and has also promised to defend the island nation in the event of an attack from China.

“They may try to keep Taiwan from visiting or participating in other places, but they will not isolate Taiwan by preventing us to travel there,” she said in Tokyo on Friday on the last leg of her Asia tour.

China announced on Friday that that it is suspending all cooperation with the US on climate change, as well as halting high-level military dialogue as part of a raft of responses to Nancy Pelosi’s visit to Taiwan.

Earlier, the country announced imposing sanctions on Ms Pelosi and her immediate family in response to her “vicious” and “provocative” visit to Taiwan, the Chinese foreign ministry said. 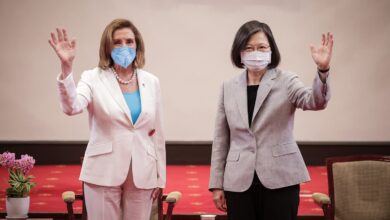