When we first see Josh Hartnett in Sofia Coppola’s directorial debut The Virgin Suicides, he is lit like an old-school movie star. “Eight months before the suicides,” explains a voiceover, “he’d emerged from baby fat to the delight of girls and mothers alike.” In her cult 1999 film, Coppola frames Hartnett strutting down a school hallway with Seventies pin-up hair before receiving brownies and completed homework from would-be female suitors. His eyelashes seem painted on. Coppola’s vision of the then-19-year-old felt like a premonition, and Hartnett graduated from the film an A-lister in waiting. Or at least, that was the plan. Instead, what followed was one of the most interesting cases of Y2K star-making gone awry.

This week, Hartnett heads up The Fear Index, a new Sky Atlantic series in which he plays a computer scientist plunged into a dangerous cyberconspiracy after developing an AI that can manipulate the stock market. Think of it as The 39 Steps with iPhones and jittery camera work. It’s his most recent European project – he lives in Surrey with his actor wife Tamsin Egerton and their two children – in a lengthy run of them, including horror series Penny Dreadful and Guy Ritchie action movie Wrath of Man. Mainly, The Fear Index reminds us of Hartnett’s leading-man chops. He remains a striking performer, simultaneously buoyant and brooding, and The Fear Index reminds you not only of his actorly charisma but how odd it was that he vanished from Hollywood. Like in his early film roles (The Faculty, 40 Days and 40 Nights, Pearl Harbor), it sees Hartnett half-asleep in the best possible way, with a loose, squinty charm that’s confident but never cocky. He’s innately watchable. The perfect matinee idol.

But just because someone looks like a movie star doesn’t mean it’s the easiest of fits. Even in his early press interviews, Hartnett seemed uncomfortable with the demands of celebrity. ​​“My opinions definitely changed when I got [to LA],” he told Interview Magazine in 2000. “I thought it was going to be this magical place… I was kind of disappointed. I moved away pretty quickly.” Back then, his career was on fast-forward. In 1997, he was a Minnesota native who had just moved to Los Angeles. Between 1998 and 1999, he shot seven movies. By the time he was cast in Michael Bay’s Pearl Harbor in early 2000 and Ridley Scott’s Black Hawk Down a few months later – both roles that seemed set to send his teen-movie fame stratospheric – he was described in the press as a man with a target on his back.

“Josh will get very famous very quickly and runs the very real risk of becoming a sort of one-man embodiment of the Backstreet Boys to hormone-crazed 15-year-old girls from Minnetonka to Tarzana,” wrote his Pearl Harbor co-star Ben Affleck in Vanity Fair. “He is particularly at risk for this as he is so very pretty. I suspect he’ll find the prospect of this … somewhat overwhelming. It’s great and heady, but a little weird to say the least.”

Young actors often have these narratives. They experience that first flush of fame, where they star in multiple movies of varying quality and develop a fanbase, before becoming more strategic with their film choices. Alongside all of that are discussions of too-much-attention, and the transition from being a total nobody to somebody everyone knows and has an opinion on. Typically, this is followed up a year or two later with a post-mortem interview, where the actor in question talks about how they dealt with instant fame and what they learnt. But unlike Hartnett, they don’t usually disappear right in the middle of it.

“I’m sorry if I disappointed people,” he told Marie Claire in 2014, well over a decade on from his industry peak. “In the midst of the pressure of people wanting you to do these huge franchise films or chasing you around, there is no privacy. And that pressure cooker made me realise I needed a simpler life, so I went back to Minnesota. It was important for me to construct myself into a better human.”

Hartnett’s late-Noughties career is a strange melange of blockbuster cameos (Sin City), rapidly forgotten indies (Mozart and the Whale) and noble failures (Brian de Palma’s The Black Dahlia). He had a meeting with Christopher Nolan about playing Batman, but didn’t pursue it, just as he didn’t pursue Superman, despite being high on studio wish lists for the role. It was something he’d come to regret. “Relationships were formed in the fire of that first Batman film, and I should have been part of the relationship with this guy Nolan, who I felt was incredibly cool and very talented,” Hartnett told Playboy in 2009. He admitted he spent much of that era turning things down. “I said no because I was tired and wanted to spend more time with my friends and family. That’s frowned upon in this industry. People don’t like being told no.”

You can understand his frustration. Hartnett was an actor who wasn’t so much catapulted to fame as manoeuvred into it by forces beyond his control – his splashy 2001 profile in Vanity Fair was, after all, titled “The Making of Josh Hartnett”. He worked a lot with Harvey Weinstein, too, who stuck him in a multi-picture deal after he produced Hartnett’s first two films, 1998’s Halloween: H20 and The Faculty. “We had a sort of antagonistic relationship because the contract I signed for those films guaranteed me to be a part of, like, five more,” he told The Guardian last year.

Hartnett – like Ben Affleck, Matt Damon and Ewan McGregor before him – was a Weinstein movie star, thrown into films he didn’t want to do by the disgraced producer. Take the forgotten Alan Rickman hairdressing comedy Blow Dry (2001), which miscast Hartnett as a Yorkshire teenager. Though his was a supporting role, the film’s poster presented Hartnett and She’s All That’s Rachael Leigh Cook as Blow Dry’s leads, and the film as a teen sex romp.

Add this to the melodramatic warnings of global ubiquity and Hartnett’s early career seems rather miserable, and saw him working with a lack of agency in an industry that saw him as a commodity. When you’re not built for that kind of machinery, it can easily break you.

Now, without the pressure to be cinema’s “It boy”, Hartnett seems much more comfortable as an actor. He’s brilliant in The Fear Index, looser in the limbs and willing to take big swings. A psychological freak-out in the third episode sees him channel Peter Finch in Network, as Hartnett shakes with mad-eyed rage when insisting that he’s being surveilled. On the big screen, he’s also finally fulfilled the potential of that mid-Noughties Christopher Nolan meeting, having just worked with the director on his latest film, the historical thriller Oppenheimer. Next month he’s in Guy Ritchie’s Operation Fortune, an action comedy that casts Hartnett as the kind of person the film industry always insisted he was: the biggest movie star in the world. So he got there in the end, but on his terms rather than Hollywood’s.

‘The Fear Index’ begins on Sky Atlantic on 10 February

Charithra Chandran says she felt pressure on Bridgerton set: ‘What if I messed it up for future Indian actors?’ 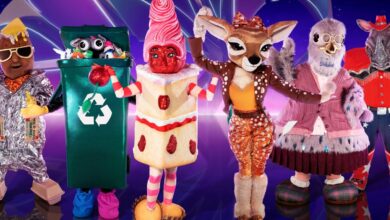 The Masked Singer: All the clues, rumours and guesses so far 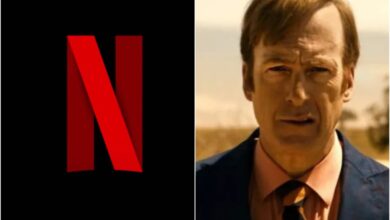 Better Call Saul: When is season six out in the US and UK?