The hasty arrival of Russian armour and artillery was an indication of how the tide of war is changing. This was not an army on the offensive, but in retreat from the sweeping counter-offensive in which Ukrainian forces have broken through enemy lines in the northeast of the country.

Yevhen Pronin watched the regrouping in the Donbas through the lens of his drones – the unmanned aircraft which played a vital part in the Ukrainian counter-attack and in the overall conflict, from fighting off the Kremlin’s assault on Kyiv in the first days of the invasion to the recent recapture of Izyum and other strategic locations.

Such has been the level of damage inflicted by Ukraine’s drone teams that the Russians have offered bounties on their heads.  Yevhen and his team have been among those warned by intelligence that they have been targeted.

It is an occupational hazard, says the 31-year-old, who put his career as a successful lawyer on hold to fight for his country and knew full well the risks involved on the frontline. The imperative now is to focus on the Russian weaknesses and exploit these and continue to hurt them.

“The Russians seem to have learned their lessons a bit,” he says. “It was interesting watching the way they formed up when regrouping. It was very cautious, one line of DNR and LNR [the separatist Donetsk and Luhansk republics] and then the Russian units behind.

“The DNR and LNR guys were the pawns as usual, they would be the sacrifice, the first to get hit; they had the worst kit as usual. But the Russian stuff was also pretty old, Soviet era, they have lost a lot of the more modern kit in Izyum and other places; that’s good news.”

Yevhen and his unit played an important role in key operations that have dramatically changed the battlespace.

Their drones have been providing surveillance footage and intelligence for strikes by Western-supplied HIMARs (High Mobility Artillery Rocket Systems) and MLRs (Multiple Launch Rocket Systems)  that have proven to be lethally effective. At the same time, the unmanned aircraft have been carrying out regular hits on Russian positions.

“The Russians fire one of two rounds and move quickly because they are afraid of getting hit by artillery, by things like HIMARs,” says Yevhen. “The idea is not to let them settle. The Donbas is the next front for our counter-attack. So we need to keep pressuring them.”

He adds: “We also hit them with our drones. I have used drones to attack them. On their tanks, their positions, their vehicles, on groups of them; we kill Russians, I have no hesitation in doing this. If we don’t kill them, they’ll kill us, not just men, but children, women, old people.

“They target us as drone operators. Our security services have picked up messages on Russian soldiers being offered money or leave if they kill or capture us. We are quite vulnerable because we have to operate very close to the Russians, in the grey zone, sometimes maybe just 100 metres away. It’s something we are very aware of. But we have to be close to them to do our work.”

One of the attack drones used by Yevhen’s unit was originally produced for the agricultural sector, an example of the improvisational skills Ukrainians have shown during the conflict. Around 6,000 unmanned commercial aircraft have been converted for military use.

They have been used alongside imported military drones, and their work was celebrated at the start of the war when footage appeared to show successful strikes. A song about imported Turkish drones, “Bayraktar”, became an instant hit, endlessly played on the airwaves. But while a single Bayraktar TB2 costs around $2m (£1.75m), commercial models such as DJI Mavic 3 can be obtained for $2,000.

On the other side, the Russians have more surveillance than attack drones and both types have been lost in large numbers during the conflict. They have been mainly using the Orlan-10, a fairly basic aircraft which can carry small bombs as well as cameras.

But even the stocks of those are now estimated to be down to a few hundred and Moscow has turned to allies abroad, especially Iran, for supplies. Some of the drones sent by Tehran have malfunctioned. But the Shahed-136 delta-wing drones have now begun to be used with some impact.

Some of Yevhen’s aircraft are provided by the “Army of Drones” project which is a part of United 24, an initiative from President Volodymyr Zelensky that has raised more than $185m through global donations and has become an important part of Ukraine’s war effort.

“Army of Drones” is run by volunteers, some of the thousands who are determined to resist Russia’s invasion. While Yevhen’s legal practice is on hold, he continues in another role as head of Ukraine’s athletics board, which allows him to attend sporting events abroad.

It is important for Ukraine that its sportsmen continue to fly the flag. The national football team qualified for the World Cup play-offs, beating Scotland in Hampden Park while war was raging at home, but narrowly losing to Wales in Cardiff. The heavyweight boxer Oleksandr Usyk remains world champion in two classes, beating Britain’s Anthony Joshua last month. Two former heavyweight champions, Vitali Klitschko and his brother Wladimir, were on the forefront in the civic defence efforts of Kyiv when the Russians tried to surround the capital.

‘An act of terror’: At least 10 dead as Russian missiles strike a crowded Ukraine shopping mall 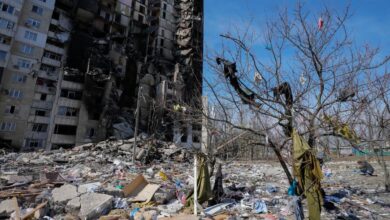