A 15-year-old boy was left feeling “scared, vulnerable, numb and shocked” after he was allegedly groped in his bunkbed by a Tory MP, a court was told on Wednesday.

Imran Ahmad Khan, 48, MP for Wakefield, is on trial for sexually assaulting the then-teenager at a house in Staffordshire in January 2008.

The complainant, now 29, detailed how he ran “as fast as I could” to his mother after the alleged assault and told her “that guy was trying to touch me”.

The Conservative MP had been at the house for a family party and was staying in a bed in the same room as the 15-year-old and his brother, the court was told.

The alleged victim described how he had been in his bunk bed in a sleeping bag and under a duvet because it was cold in the room at the top of the house. Around the top-bunk there was a wooden bar to prevent whoever was sleeping there from failing, the court heard.

When the two boys turned the lights out and went to bed, the teenager could hear Khan’s “heavy breathing”.

“He started off at the end of my bed where the bookcase was,” he told the police in a video interview that was played to jurors at Southwark Crown Court.

“He would put his hand through the bar and try and touch my feet. I was in my bed I had… my duvet on top of me. Also had a sleeping bad that I was in.

The complainant told officers how he had been “leaning all the way over the other side of the bed” to try and get away from Imran Khan’s probing hands.

“I kept sort of pushing his hand away pushing it back and it kept, sort of kept coming.

“And then he went over the bar and I thought as long as it doesn’t get to my groin it’s okay.”

He continued: “There were pockets where [the sleeping bag] opened up and there was quite a big pocket and he managed to get in one at that point I kind of froze and I didn’t really know what to do.

“He went into the sleeping bag… lifted his arm up over the bar.. and then got to my groin and I freaked out really and I jumped out of bed.

“I ran as fast as I could. I ran to my mum and I just told her that that guy was trying to touch me.”

His mother, the court heard, got out of bed and immediately went to collect her other son from the bedroom.

The next morning “the guy was gone”, the alleged victim said.

The court heard that the complainant was a Labour supporter, but that he denied that his allegations were politically motivated. Explaining why he came forward, he said: “I want this person to be convicted of the wrong that he had done, so that it can’t happen to anyone else.”

He told police: “I don’t think it’s right that a person is in a public office who has done this.” 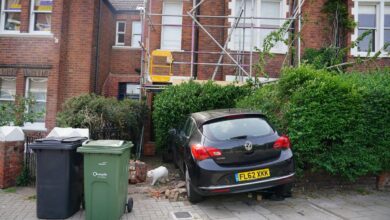 Labour on course to win next election ‘with comfortable majority’, David Lammy says