Inflation fell slightly to 10.5 per cent in December from 10.7 per cent in November, the Office for National Statistics has said.

Falling fuel prices helped UK inflation ease back again, offering further signs that the peak of the cost of living crisis has passed.

The fall marks the second month in a row that the inflation rate has dropped back.

Grant Fitzner, chief economist at the ONS, said: “Inflation eased slightly in December, although still at a very high level, with overall prices rising strongly during the last year as a whole.

“Prices at the pump fell notably in December, with the cost of clothing also dropping back slightly. However, this was offset by increases for coach and air fares as well as overnight hotel accommodation.

It comes after Britons have been hit by steadily rising inflation throughout 2022 as the cost of living crisis peaked, pushed higher by rocketing energy bills, while essentials have also jumped higher across the board.

Food and drink prices hit 16.4 per cent in November – the highest for 45 years – adding to the strain felt by families across the UK.

Chancellor Jeremy Hunt said: “High inflation is a nightmare for family budgets, destroys business investment and leads to strike action, so however tough, we need to stick to our plan to bring it down.

“While any fall in inflation is welcome, we have a plan to go further and halve inflation this year, reduce debt and grow the economy – but it is vital that we take the difficult decisions needed and see the plan through.

“To help families in the meantime, we are providing an average of £3,500 of support for every household over this year and next.”

Immigration minister Robert Jenrick described the slight fall in an inflation figure as a “tentative sign of improvement”.

He told Sky News: “It’s the first positive or tentative signs of improvement. But there’s a long way to go here.

“We are seeing there’s an improving situation internationally as energy prices begin to fall, but I don’t want to overstate how impactful that will be in the short term.”

Despite the fall, Labour’s shadow chancellor Rachel Reeves pointed out that the rate is still five times the two per cent target.

“13 years of wasted opportunities under the Tories have left our economy weak and families worse off,” she said.

“We do not have to continue on this path of managed decline. Labour will stabilise our economy and get it growing.” 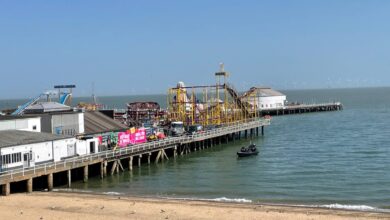 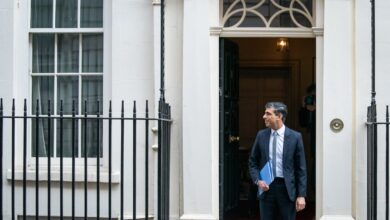