When Joshua Adeyemi’s bible study leaders eventually told him the name of the church he was attending, he says the information came with a request – do not research it.

Joshua had been attending online study sessions for two months, 7pm-9pm, three days a week. But it would be another four months before he realised he was part of a “doomsday cult” called New Heaven New Earth (NHNE), or Shincheonji, where members believe that a South Korean man, Lee Man Hee, is a “chosen messenger of Jesus” on Earth to bring about the Second Coming. Had Joshua done that research, he might have learned sooner of Lee Man Hee’s conviction for embezzling the church’s funds.

“The first two months they keep it very vague so you think it’s just a bible study with other Christians. But as you learn more you feel special, you get lost in it, you feel chosen and you start to believe in what they’re saying,” he said.

The 20-year-old is one of a number of ex-members, who The Independent has spoken to, who have raised concerns about the group’s recruitment techniques – said to ‘target’ young Black people – and its practices, which many say leave them isolated after they are encouraged to abandon their family and friends.

Representatives of Shincheonji said that the group was now more open and its members were able to pursue careers and interests outside the sect.

The group has bases in London and Manchester but its reach is much wider, with hundreds of people attending Zoom meetings. Many more potential followers have been approached by members on social media after the pandemic forced the group’s activities online.

Joshua was approached on Instagram direct message by a NHNE member in September 2020 and he was soon having Facetime calls with them about his Christian faith. He went to an introductory Zoom session in December, which he thought was full of new recruits. He claims he later found out that a number of the people on the call were in fact members pretending to be going along for the first time.

From there he was signed up for one-to-one mentoring sessions, a bible study course, and he became a member in February 2021. He left some six months later in July after he grew concerned about what he was reading about the group online.

“The first weird thing they did was tell me not to tell my parents. My parents are Christian so I thought I would be able to tell them but the way they described it, they said it was too deep, and I should keep it between just us,” the Nottingham Trent University student explained.

Soon he felt the group had taken over his life. “I was cutting off my friends and family. No one in my life actually knew I was going to the sessions.”

He said there were many times when members would put pressure on him to make a choice between them and his friends, or ditch his university work so he could study their teachings.

As he was learning more about the doctrine, he grew convinced that he was witnessing the Second Coming and the imminent end of the world. “It’s like a doomsday cult,” he said. “They make it seem like it’s happening right now.”

On top of Shincheonji’s study course, members are required to take tests, which evaluate their knowledge of the group’s doctrines and assess their worthiness for salvation.

Those who study to a sufficient standard will allegedly be part of a chosen 140,000 people from the tribes of Israel mentioned in the biblical Book of Revelation.

Shincheonji (SCJ) has far exceeded 140,000 members internationally, and so the UK group is said to be recruiting the “heavenly multitude” clothed in white mentioned in the apocalyptic book.

One ex-member estimated there were 400-450 members in the UK church.

The church, which is considered a cult by many, was founded in 1984 in South Korea by 90-year-old Lee Man Hee.

Details about Lee Man Hee’s role within the group are apparently only revealed many months into the initial bible course and when they were recruiting, ex-members said they were told not to mention Shincheonji.

Man dies after falling into Thames while being arrested by police 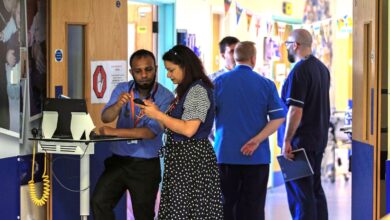