Isla Fisher has a solution to the problem of dodgy landlords, though admittedly it may not be one available to everyone: rent a house from Jennifer Aniston instead. Back in the mid-2000s, the Australian star of Wedding Crashers, Now You See Me and Confessions of a Shopaholic was in need of an LA home to share with her then-boyfriend, now-husband Sacha Baron Cohen. A dinner with Courteney Cox led the pair to her Friends co-star, who happened to have a spare abode.

“She was the nicest landlady,” Fisher says. “When we arrived, she’d left a basket the size of a desk and in it were flowers, fruits and the sweetest handwritten note. There were magazines and I think she put a book in it? I’d rented countless apartments and I’d just never, ever had a landlady or landlord even say hi to me. I couldn’t believe it… if you can rent from Jennifer Aniston, you absolutely should.”

That Fisher can make a line like that last one not only non-maddening but sweet and funny is a credit to her innate buoyancy. Then again, the 46-year-old is so quick to self-deprecation that you barely have time to notice if she says something starry. When she asks me not to publicise where she and her family are currently living, she acknowledges that it’s not the usual thing to do. “It’s for security, I’m just a worrier,” she sighs. Similarly, when she pops up for a few seconds on her Zoom camera before switching it off entirely, she admonishes herself with a joke. “I have no make-up on and I’m also 105 years old. It’s not the greatest. I do typically try to look presentable when attempting to sell my TV show.” She’s naturally disarming. I imagine everyone who meets her is convinced she’ll be their new best friend. Until that happens, though, we must make do with her work.

Fisher’s TV show is Wolf Like Me (soon to air in the UK on Prime Video); it’s a genre-bending dramedy about a boy, a girl and the werewolf she turns into every full moon. She plays Mary, a traumatised advice columnist in Adelaide, who mysteriously smashes into the car of widower Gary (Josh Gad). Gad and Fisher are somewhat cast against type: there are laughs here, but they’re deliberately subtle. I was taken aback by how moving the show is, and the sense of operatic urgency that writer/director Abe Forsythe grants it. There are emotive voiceovers, sweeping vistas and lots of running. Wolf Like Me is about the horrors of new love, and what happens when two broken people seem fated to be together.

“We’re so used to seeing romcoms where we’re only given the nice bits of people connecting,” Fisher explains. “It feels quite original. Love is scary! Once you give somebody your heart and they give theirs, obviously you’re completely vulnerable. The show is more an exploration of love mixed with shame and fear.” Fisher says she gravitates towards characters with secrets, “but I also enjoyed playing Mary because she’s so lonely. I’m super gregarious, I love people, I socialise whenever I can. Mary’s the total opposite of me, and she’s got all this baggage and doesn’t feel safe being around people…”

It’s at this point that Madame Tiny Paws has had enough. Fisher gasps. “OK, so while I’m talking to you, our cat has just got up on two legs and opened the door in front of me. She’s actually taken it upon herself to Houdini the s*** out of this room.” She breaks into laughter. “Even in our household, where everyone has such big personalities, somehow Madame Tiny Paws is the boss. Honestly, you should just chat to her. I’m sure it’d add some real dimension to this interview.”

Few of Fisher’s characters would ever cede the spotlight like that. Her creations tend to have the energy of a drunk stranger in a nightclub bathroom, people as startlingly deranged as they are wise. Wedding Crashers, Shopaholic and the pitch-black comedy Bachelorette cast her, respectively, as a nymphomaniac, a credit card junkie and a cocaine fiend, all of whom rattle with manic desperation. You’d think they’d be more well-regarded, but like most kinds of character comedy, they typically fly under the radar. Particularly when it comes to major awards bodies.

“Comedy is the most vulnerable sort of performance,” she says. “If you miss the mark, there’s nothing to catch you. It’s not like drama, yet comedy just isn’t considered equal to it, particularly in the eyes of the Oscars.” She reels off an embarrassingly long list of great comic performances that didn’t crack the Academy Awards: Emily Blunt in The Devil Wears Prada, Regina Hall in Scary Movie, Goldie Hawn in “bloody everything”. “So many mainstream comedies have these fantastic performances, and yet they don’t get the love they deserve.”

She expresses disappointment at interviews in the past that have ignored how she does what she does. “Usually it tends to be [questions] about when I last saw an infinity pool, or details about my husband. Without sounding like a luvvie and getting all ‘thespian’, I did go to clown school. I studied with Jacques Lecoq, who’s a phenomenal clown teacher. He taught me to think about how [my characters] walk and talk – it’s like putting on a costume, and doing that then informs all the internal work. You prepare and you prepare, and you try to be as meticulous as you can.”

Is there an element of sexism to people’s lack of curiosity about female comedy acting? “It’s really complicated – I sort of don’t want to weigh in on it because then it becomes the quote.” She remembers years ago telling a journalist that it’s unfair that women are so often cast in comedies as “the straight-woman who rolls her eyes at the overconfident, dumb-dumb guy”. But then it trailed her. “It just proliferated the internet, and I was always having to give interviews about it.” Things feel better today, she says, both in the industry and during interviews. “I love being asked more meaningful questions about what I actually think about things. And hopefully, even though I’m deeply proud of and completely in love with my beautiful husband and family, I’ll be asked about more than that [too].” I surreptitiously scribble out the Borat questions from my notepad.

As I keep accidentally reminding her throughout our conversation, Fisher has been around for a while. Long before she broke out as Shaggy’s hippie girlfriend in Scooby-Doo in 2002, she’d become famous in 1994 playing the perpetually unlucky Shannon Reed on Home and Away. In 1997, she moved to the UK to find work here. I assume her late-Nineties London era – where she made BBC One comedy dramas with Amanda Holden and dated Darren Day – were her “lost years”. “I wouldn’t say they were my most focused years professionally,” she says. “It was that classic period of your life where you’re just trying to work out your identity. I definitely didn’t have my wings clipped in London. I remember doing a lot of West End theatre, and, honestly, just having a great time in pubs.”

She was also learning, travelling back and forth between London and Paris to study at clown school. While she’d always made people laugh – moving schools and countries a lot thanks to a UN worker father meant humour became a defence mechanism – she didn’t train as a clown for that reason. Really, she just loved Geoffrey Rush’s performance as the pianist David Helfgott in Shine (1996). “I found out he studied with Jacques Lecoq, so I thought, ‘Hey, I have to study with Jacques Lecoq, too! I’m the new Geoffrey Rush,’ I thought.” She quickly interrupts herself. “I’m kidding – oh god, please don’t print ‘Isla Fisher: I’m the new Geoffrey Rush’! Because that is exactly not what I thought. I just wanted to one day be able to physicalise my comedy like that. Slapstick, mime, making a funny face: there’s just something about that I enjoy more than anything.”

All of that being said, she didn’t realise she was a natural comedian until Cohen pointed it out to her. “My husband said, ‘You’re the funniest person I know – you should be doing comedy,’ and before that it just never crossed my mind.” This was shortly after they got together in 2001. They married in 2010, and have three children. Fisher makes a point not to talk about her family in interviews, but does mention Cohen occasionally in conversation, and often posts pictures of him to her Instagram. But in an echo of her husband’s crusade against social media companies – in 2019 he called Facebook the “greatest propaganda machine in history” – she has problems with the platform as a whole.

“We all know what Instagram is,” she sighs. “It’s toxic for children and [for] the proliferation of fake news. They don’t have to meet publishing standards, it appeals to our base instincts. Actually, I’m being gentle – Instagram increases bullying and fear of missing out and leads to anxiety and depression. So, obviously, I am no fan of Instagram. I try to focus as much as possible on [posting] work-related stuff, and not posting anything personal. Sometimes I’ll post, like – it’s Valentine’s Day today, so I may post something later on…”

A few hours after we speak, I visit Fisher’s Instagram and see that she has indeed posted a Valentine’s message to her husband. “Sacha, you are my rock,” she writes, alongside a blurry photograph of a rock shaped like a massive erection. It is deeply silly, quirkily romantic, and maybe more revealing of the humour at the heart of their chemistry than anything she might have said out loud. Love is scary, but it can also be funny. 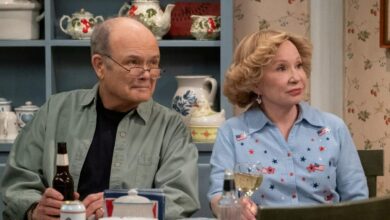 That ’90s Show review: It’s not quite clear who this nostalgia trip is for

Isla Fisher: ‘Instagram is toxic for children and filled with fake news’