The shelling began at 3.40pm – round after mortar round hitting the small border town of Novoluhanske. One soldier was seriously injured while two others had died earlier in the day along this part of the Donbas. It is an area that has faced sustained barrages in the last three days.

The increase in attacks has come amid repeated claims by the separatist leadership of the “People’s Republics” of Donetsk and Luhansk that the Ukrainian government, backed by the west, is about the launch an offensive. It has been claimed that bombings have taken place in the breakaway areas and the authorities have announced a general evacuation of the population to Russia because of the supposedly rising threat.

The moves, according to the US, Britain and their western allies, are part of a “false-flag operation” preparing the pretext for Vladimir Putin to invade Ukraine after he had amassed a force of between 130,000 and150,000 at the border.

Joe Biden says he is convinced that Mr Putin has made the decision to order military action. Jens Stoltenberg, the Nato secretary general, has said that “all signs indicate that Russia is planning a full-scale attack on Ukraine”. Boris Johnson has claimed that Russia is “planning the biggest war in Europe since 1945.”

The attack on Novoluhanske along the “Line of Control” that separates the breakaway areas from the rest of Ukraine, came as Ukraine’s Minister of Interior, Denys Monastyrsky, accompanied a group of journalists to the frontline to show what the Ukrainians say are flagrant breaches of ceasefire by the Moscow.

As the firing began, the minister – dressed in combat fatigues – his military escort, his officials, and journalists ran for cover; no one was injured.

“What happened is an example of what the people around here have to live with every day”, said Mr Monastyrsky afterwards. “The Russians are creating false stories and, at the same time, carrying out this kind of bombing.”

Mr Monastyrsky was “shocked” that the Russians would carry out such an attack when they knew – he was convinced – that the international media was present in the town. “This shows they are shameless, they don’t care about international opinion at all”, he declared.

A young officer was surprised that the interior minister was surprised. “They have killed their own journalists in Russia, so why should they worry about foreign journalists?” He asked. Asked about journalists killed in Ukraine, he said “the Russians or their agents killed them”, and then added: “But there are some bad people here as well, and they can be used by the Russians, that is the reason why we are worried about what may happen here, this is a very dangerous time.”

The two soldiers killed on Saturday were Anton Sydorov, 35, the father of three daughters : and 34 year old Denys Kononenko, the father of a young son. Howitzer and mortar fire was responsible for the two deaths, said the Ukrainian military.

Captain Sydorov became known to the public after composing and singing in Russian on television a song called “Brothers in Arms” about the sorrow of war. His commanding officer, Brigadier General Mikhail Drapatiy, the deputy chief of joint forces operations in the area, condemned the “unprovoked aggression” which has led to loss of life.

Brigadier General Drapatiy said he had lost “dozens” of comrades since the separatist war in 2014. “At one level you accept that fellow soldiers will sometimes get injured or die in a war”, he said.“ But then at a human level you think about someone like Anton Sydorov, with a wife and young children, dying during what’s meant to be a ceasefire, then you do feel sad and a bit angry.”

What is happening now, said Brigadier General Drapatiy, is the result or what Russia’s belligerence.

“They are frightening their people and getting them to leave their homes to go to Russia, they are saying we are planning a big attack, do you see a big army on this side of the border planning to attack?” he asked. “No, this is about Russia, we are fighting Russia. And it seems that Russia is planning to attack.”

Davide Arakhamia, An MP for the Servant of the People – the party of President Volodymyr Zelensky, who called for a further ceasefire on Sunday – who had also come to the frontline has been arguing against the possibility of Russian invasion or even incursion. What is taking place, he has held, was asymmetric, including psychological, warfare by Moscow.

Mr Arakhamia has blamed foreign organisations, including some media outlets, of spreading “blatant fake news” about warnings of a conflict, comparing them to Russian propagandists, He added recently that the “panic phrase of the crisis will soon disappear.”

After the visit to the frontline Mr Arakhamia said he was now “50 per cent” more convinced that the situation was very serious. However, he wanted to point out that his family was from Abkhazia, the region which broke away from Georgia after Russian intervention, and he knew how “these things play out”. His wife and children were in Kiev, said the MP, and would remain there. The capital, he said, “will not be attacked.”

For the residents of Novoluhanske what happened on Saturday has become a regular occurrence. “This is only getting publicity because this politician is here and the foreign journalists are here”, Tetyana Omelchenko, 46 , with three children, wanted to point out. “We have had eight years of violence, it died down and for a while and now it has got worse. We hear the Russians and all the foreign leaders threatening each other, but it is the ordinary people who are left to suffer.”

“We have relations in Donetsk who have fled because they believe there’ll be war, and now people here are getting frightened as well. We thought there were international people who are supposed to stop the fighting, what has happened to them?”

‘Trump will lose his mind’: The Jan 6 hearings vow to ‘change history’. Here’s what to expect 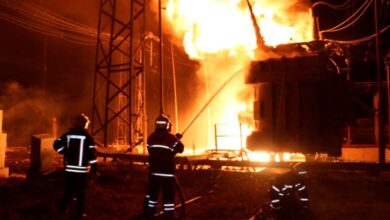