Chancellor Jeremy Hunt is said to be preparing to announce a slimmed-down budget in March without any tax cuts as he tries to balance the books after the financial turmoil of Liz Truss’ brief premiership.

Some frustrated Tory MPs who backed the Truss government’s plan for the radical tax cuts which sparked market panic are preparing to push again for the “growth” agenda.

Some senior figures in the Truss cabinet are thought to have gathered in former Treasury minister Simon Clarke’s office last night to launch the Conservative Growth Group.

But Mr Hunt is not planning to reveal any tax cuts as soon as the March fiscal statement and will focus instead on bringing down debt, according to The Guardian.

“We don’t have enough headroom to announce tax cuts at this point,” a source told the newspaper. “It wouldn’t be responsible. Our focus is wholly on steadying the economy and, with that, repairing our economic reputation.”

It would mean the autumn budget is the most likely prospect for some tax cuts, if Rishi Sunak wants changes to come in the following April before a general election expected in 2024.

Mr Hunt vowed to tackled the “nightmare” of high inflation on Wednesday, as the latest official figures showed that it eased on slightly in December – falling from 10.7 per cent to 10.5 per cent.

“High inflation is a nightmare for family budgets, destroys business investment and leads to strike action, so however tough, we need to stick to our plan to bring it down,” the chancellor said.

Mr Hunt said the fall was “welcome”, but said it was important to maintain fiscal restraint. “We have a plan to go further and halve inflation this year, reduce debt and grow the economy – but it is vital that we take the difficult decisions needed and see the plan through.”

TUC general secretary Paul Nowak said stubbornly high inflation – remaining close to a 40-year high – showed why ministers must back down and start negotiating on the pay disputes causing a wave of public sector strikes.

But Home Office minister Robert Jenrick used the slight fall in an inflation figure as a reason not to award striking public-sector workers with significant pay rises.

Calling inflation the “big evil”, he told Sky News: “he worst thing we could do domestically would be to significantly increase public-sector pay and to then entrench inflation in the British economy, and get into a kind of wage spiral that would be very detrimental.”

It comes as thousands of nurses across England go on strike again on Wednesday and Thursday, while the GMB union is expected to announce fresh dates for ambulance staff strikes later today.

Massive disruption is expected on 1 February, when train drivers with the RMT and Aslef unions will join NEU teachers in England and Wales, university staff and around 100,000 civil servants in the PCS union.

Earlier this week Bank of England governor Andrew Bailey said inflation should come down rapidly during 2013. But he also warned that the shortage of workers in the UK posed a “major risk” to getting inflation down as quickly as expected.

Liberal Democrats’ Treasury spokesperson Sarah Olney MP said inflation continued to “push families to the brink”, adding: “Struggling families and pensioners deserve more support but the government’s track record on the cost of living crisis has been nothing short of a failure.” 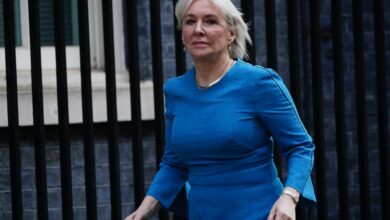