Jurassic Park should never have worked as well as it did. Steven Spielberg’s 1993 dinosaur blockbuster was a mess of contradictions: an absurd fantasy with down-to-earth human characters; a horror-inflected monster movie that children could still enjoy; a tech-heavy CGI-fest with a beating human heart. It’s no wonder studio executives looked at the film’s immediate cultural ubiquity (and near-billion-dollar gross) and hurried out a sequel. The people wanted more, and, nature be damned, they were going to get it – even if it meant cloning star Jeff Goldblum from amberised DNA.

Of course, that ended up not being necessary, and Goldblum v1.0 did return, for The Lost World: Jurassic Park in 1997, adapted from a novel somewhat reluctantly churned out by Michael Crichton two years earlier. In 2001, another sequel followed, sans Spielberg and Goldblum but with Sam Neill reprising his lead role from the original. Cut to 20 years later, and the franchise seems finally ready to hang up its straw hat with the release of Jurassic World Dominion. Dominion is the third film in the Jurassic World series, a trilogy of films that loosely follow on from the original Jurassic Parks. Dominion is, significantly, the first film since 1993 to reunite the three original leads – Neill, Goldblum and Laura Dern. Also thrown in the mix, with considerably less fanfare, are characters from the previous two Jurassic World films, including Chris Pratt’s blandly heroic velociraptor wrangler Owen Grady, and Bryce Dallas Howard’s dino-conservationist Claire Dearing.

In modern parlance, Dominion is what is referred to as a “legacy sequel”: a follow-up made years after the original, bringing back the old, time-ravaged cast and mixing them with young bucks. When they work – as in the recent case of Top Gun: Maverick, or Blade Runner 2049 a few years ago – they can really work. When they don’t, you get Ghostbusters: Afterlife. A bad legacy sequel isn’t just a crappy film; it can feel like a vulgar and cynical betrayal of decades of goodwill. Dominion has already fallen completely flat with critics. “Dominion is the final entry into a trilogy that at no point ever knew what it was doing,” writes Clarisse Loughrey. “It’s been like watching a cook completely butcher a recipe, before manically pouring in spice after spice to try and fix it.” Theproblems run deeper than just Pratt’s flat affect or a few too many nauseating callbacks. Jurassic Park didn’t need a sequel in the first place. Five is ridiculous.

At its core, Jurassic Park was a perfectly self-contained story: a morality tale about the folly of playing God. But layered into its screenplay were a handful of other narratives – a critique of capitalism; a paternal awakening; an examination of human behaviour in the face of disaster. In five subsequent films, these themes have never really been expanded upon, nor replaced with new ones; all we’ve had is blunt reiteration. I suppose this stems from the limitations of the franchise’s basic premise – when your remit is more or less “dinosaur theme park goes wrong”, you can’t exactly go off waxing lyrical about the politics of desire or suburban ennui. (Or maybe you could. They’ve certainly never tried.) These are adventure films, fundamentally built around big CGI monsters and adrenaline-charged chases. But even with this caveat, there’s something shockingly unambitious in the sequels’ approach to their subject matter. Are any of them actually saying anything that wasn’t expressed twice as deftly in one of Jurassic Park’s original subplots?

Another factor that most of the Jurassic Park sequels have completely failed to replicate is the craft behind the camera. Jurassic Park was, of course, made by one of our greatest ever filmmakers. Beneath the revolutionary special effects, there was craft oozing from every frame. Who else could have pulled off such exquisitely suspense-drenched set pieces – the velociraptor kitchen finale; the water-shaking arrival of the T-Rex; Wayne Knight meeting his end at the hands of a venom-spitting dilophosaurus?

Even The Lost World, which was rushed into production and stands as an abject failure by Spielberg’s high standards, had sequences of real cinematic bravura. (Most notably: the elaborate two-T-Rex attack on a caravan trailer; a shorter sequence in which velociraptors pick off victims walking through long grass). It sometimes is as simple as knowing where to place the camera, or how long to hold a shot. Take Spielberg away from the original Jurassic Park, and you’d be left with any old kitsch adventure movie. And that’s exactly what the franchise did.

I somehow doubt that Dominion will be the last we see of Jurassic Park, despite how ardently the whole “conclusion to the saga” line is being pushed. The fact is that these films have remained extremely popular; Jurassic World and its sequel, Fallen Kingdom,took in about $3bn between them. (Dominion is poised to be the biggest test of cinema’s pandemic recovery since Spider-Man: No Way Home.) I suppose it’s apt, if a little on-the-nose, for a franchise about greedy corporations cynically profiting off dangerous cloning technology to keep commissioning hollow facsimiles of a bygone classic. Jurassic Park has almost become a dinosaur in itself. But you can’t just keep making these things and hope that life finds a way. Sometimes – it turns out – life does not. 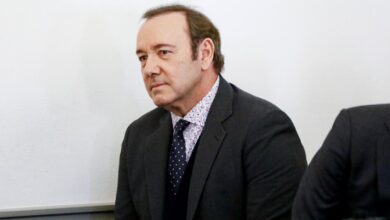 ‘He threatened my career’: 22 actors who didn’t get along with their directors

The In Between on Netflix: Viewers praise ‘heartbreaking’ film starring The Kissing Booth’s Joey King