Undisputed world lightweight champion Katie Taylor has warned “the best is yet to come” ahead of her showdown with Karen Elizabeth Carabajal.

The Irish fighter will put her belts on the line against the Argentinian challenger on Saturday evening at Wembley Arena – the venue where her professional career began six years ago.

She has since gone on to conquer the world, recording 21 successive wins including six by knockout, having most recently defeated Amanda Serrano in April at a sold-out Madison Square Garden in New York.

Despite her sustained success, the ‘Bray Bomber’ is only interested in the future and insists her drive is as strong as ever.

“I don’t find it difficult at all to motivate myself, to be quite honest,” said Taylor. “Training camp is going brilliantly, my mindset is still completely the same that it ever has been and I just love the sport.

“I’m still as passionate about the sport today as I ever was and that’s where the motivation comes from. I really genuinely believe that people haven’t seen the best of me yet and I’m looking forward to showcasing that the best is yet to come. I don’t live on past performances or past successes.”

Taylor is set to fight at Wembley Arena for only the third time following a technical knockout of Karina Kopinska on her full-time debut in November 2016 and a unanimous decision victory over Miriam Gutierrez two years ago.

The 36-year-old reflected on a “phenomenal six years” during which women’s boxing has grown rapidly.

“It is great to be back at the scene where it all started,” she said. “I don’t think we ever would have imagined six years ago that we would be in this position and headlining the likes of Madison Square Garden.

“Bringing women’s boxing up to where it is right now, it has been a phenomenal six years. I can’t wait. It’s great to headline another huge show.”

While Taylor is heavy favourite to continue her dominance, underdog Carabajal (19-0) feels ready to spring a major upset.

“It’s always a dream when you go into the sport to fight for a world title and I’m facing obviously the number one in the sport,” said the 32-year-old from Buenos Aires.

“As soon as we found out that this opportunity had arisen then we were working even harder. But I feel like we’ve been working hard enough to make us ready for this opportunity.

“When you dream about the opportunity of getting a world title, you normally think about just getting the opportunity to fight for one belt and then you go acquiring the others.

“But in this case it’s different and it’s a possibility that we could never have imagined.

“We know that we have to just go into it as if it were just one other fight and do the best we can to make sure we take home the belts.” 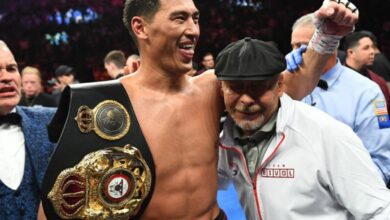 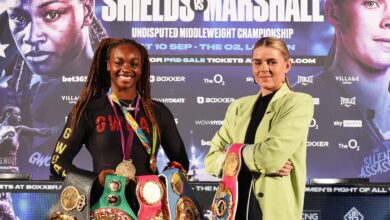