As difficult as it is to imagine, there really were years in which it seemed it was only a matter of time until Amir Khan and Kell Brook settled their rivalry.

On this Saturday night in Manchester, with those years having melted into nearly two decades, the only thing difficult to imagine was that either man would make it through all 12 rounds.

In that sense, once the first bell rang, it really was just a matter of time until Khan and Brook settled their rivalry – at long, long last.

If it weren’t for the near-deafening deluge of noise pouring in from the 20,000 in attendance and flooding through the ropes at the AO Arena, you might just have heard the joints creaking slightly as Khan and Brook, both 35 years old now, tried to scrape off their ring rust.

For this was Bolton-born Khan’s first fight in almost three years, and his Sheffield rival’s first in 15 months, and it might well have marked a retirement bout for the two former champions.

While there is so much that Khan and Brook share in common, those similarities were either imperceptible or irrelevant to the Manchester crowd, who greeted a defiant Brook with hostility while welcoming Khan like a hometown hero.

The opponents surprisingly – if reluctantly – touched gloves moments before the first round began. Any diplomacy soon dissipated, however, with Khan screaming at the referee early on after an apparent punch to the back of his head in the clinch.

The pair separated and it soon became clear that, while Khan’s speed might have slipped somewhat, he was still the faster fighter, drawing excited reactions from the crowd with every flurry – successful or not.

Brook’s timing was sharper, though, as he had predicted, and he was the first to land anything of note, staggering this rival with a right hand. Khan taunted Brook but was soon stunned again, those fragile legs nearly buckling under him as Brook circled like a shark while bearing a gleeful grin.

Khan regained some cognisance and composure in the second round – enough to put together some combinations – but Brook showed glimpses of his power advantage throughout. The Sheffield fighter established his jab well in the third frame, though Khan utilised his speed to land intermittent stinging right straights that looked like swinging what seemed set to be a see-sawing contest.

Brook came on strong late in the round, however, landing a barrage of spiteful right hooks with his foe against the ropes, dropping Khan to a knee as the bell sounded.

Again Brook smiled at Khan mockingly at the close of the third round, carrying confidence into the fourth, in which he set up camp in the centre of the ring before landing a piston one-two as the clapper sounded with 10 seconds remaining.

Khan exhibited surprising resilience to survive a sustained onslaught from an increasingly predatory Brook in the fifth, but it only served to delay the inevitable.

A jab shook Khan almost as soon as the sixth round began, and Brook, sensing a finish, swallowed up his cowing rival with right hooks and uppercuts.

With Khan’s back against the ropes, literally and figuratively, the referee saw fit to end the punishment and call off the contest.

There were few complaints from Khan, who was seen to in his corner as Brook was lofted above the ring after ridding himself of his rival, the decades melting into one blissful moment for the “Special One”.

Khan, for his part, was gracious in defeat, his antagonism melting away. At his and Brook’s age, there is no time and should be no energy for more bitterness. The crowd, despite its initial hostility, also gave Brook his deserved credit for a largely dominant display.

Khan vs Brook will no longer be discussed in hypotheses but, finally, in the past tense.

It was only a matter of time, after all.

‘There’s a lot of it going on’: Ricky Hatton urges promoters to solve boxing’s doping problem 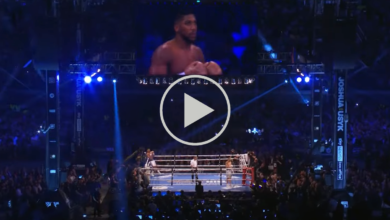