“I choose to focus on all the bravery, all the courage,” says Lady Gaga of the pandemic period that saw her Chromatica Ball tour postponed twice,.“I want to look back on this last couple of years and I always want to remember us just like this.”

We’re somewhat blessed that, come 2022 and as an acclaimed actor whose 2016 Americana album Joanne veered towards no-artifice personal exposure, Stefani Germanotta remains one of the most eye-searingly bizarre live acts in the world. “Thank you for loving a weirdo like me!” she beams to the crowd, a significant chunk of which is clad in its own home-made freak outfits. And it’s hard not to fall for a mind that is avant garde enough to concoct a four-act stadium show where Brazil meets Hostel, A Clockwork Orange, Prometheus, The Great Gatsby, The Warriors, Them!, The Matrix and The Imaginarium of Doctor Parnassus.

The show opens as strangely as it means to go on. An impressionist film, like a nightmare on celluloid, captures Gaga transforming into an evil bird woman before the Prelude begins, wherein Gaga appears atop a row of brutalist mock-concrete cells, held tight in a mechanical exoskeleton and singing “Bad Romance” at a troupe of dancing prisoners while spinning oh the spot. The metaphor for being trapped in an abusive relationship is blatant, but from there the Chromatica Ball pays little heed to matching image and theme.

Gaga breaks out of her metallic strait-jacket for “Just Dance”, red alarm lights drench the stage for the Eurythmics-noir “Poker Face” and the monster is loose. By Act 1 (“Alice”, “Replay”, “Monster”) she’s laid out on a grimy hydraulic operation room slab in a blood-spattered leotard and gore-red dress, like the torture-porn victim of a backstreet Budapest spleen robbery. By Act 2 (“911”, “Sour Candy”, a magnificent “Telephone” and “LoveGame”, Gaga’s sizzle-free “…Baby One More Time”) she’s recast as a sci-fi S&M cop while the stage transforms into a steampunk version of the Nostromo. Act 3 (“Babylon”, “Free Woman”, “Born This Way”) then takes place at a decadent Gatsby party, Gaga and dancers dressed in gold suits, before they form a procession to a second stage out in the crowd and coronate Gaga as queen of the bug people.

Such shape-shifting largesse has often drawn comparisons to Bowie, but Gaga doesn’t display anywhere near the same genre-hopping spriteliness tonight. Drawing heavily from 2020’s Chromatica album, her return to dance-pop, she often seems almost a tribute act to her pop predecessors: Britney Spears, Christina Aguilera, Pet Shop Boys and – on the “Vogue”-aping “Babylon” and “Express Yourself” facsimile “Born This Way” – Madonna. These are hardly bad acts to follow, but it’s only when Gaga takes to the latest in a long line of surreal pianos for the ballad medley of Act 4 that her individual talent really shines from behind the costume rack. Interrupting tunes to dedicate them to Alexander McQueen and deliver motivational messages about identity, she bawls through the epic country “Shallow”, from A Star is Born, and stands on one leg on her stool as “Fun Tonight” turns from dolorous ballad to U2 disco.

Finally, a video of Gaga reciting a poem about how life is art and we are all eternal (tell that to Tottenham’s hangover tomorrow) gives way to an ecstatic Finale of “Stupid Love”, “Rain On Me” and “Hold My Hand”, Gaga dressed as a biker Beyonce with one spindly claw hand. It’s fair to say the queen of the freaks is back, and still unforgettable. 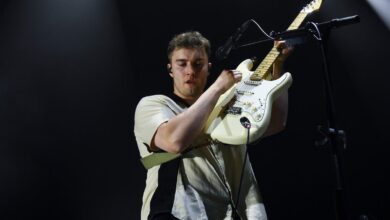 Foals’ Yannis Philippakis: ‘We were broke, we were having fun, you could smoke 40 cigarettes and not have a cough the next day’ 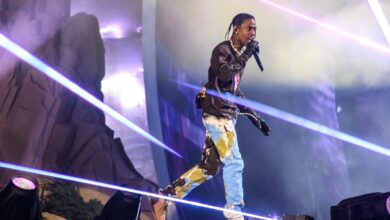