Britain is set to reach “lethally hot” temperatures this week as another heatwave threatens deaths, droughts and wildfires.

The Met Office has issued an amber extreme heat warning in place for four days starting from Thursday as temperatures are expected to climb as high as 36C in parts of England.

The UK Health and Security Agency has also issued a Level Three heat health alert as experts warn people with underlying health conditions will have “no respite” from the suffocating heat.

Met Office Deputy Chief Meteorologist Dan Rudman said: “Thanks to persistent high pressure over the UK, temperatures will be rising day-on-day through this week and an Extreme heat warning has been issued.

“Temperatures are expected to peak at 35C on Friday and Saturday, or even an isolated 36C on Saturday. Elsewhere will see temperatures widely into the high 20s and low 30s Celsius.”

July’s heatwave proved deadly as climate scientists warned that the increasingly concerning effects of global warming will mean the UK is set for more frequent spells of fatally hot weather.

The threat this poses to public health was underlined by Prof Hannah Cloke, Professor of Hydrology, University of Reading, who said: “The warnings for extreme heat from both the Met Office and the heat health alert issued by the UK Health Security Agency are another reminder that this summer in the UK is proving to be lethally hot.”

The professor went on to explain that while this heatwave will feel “less intense” than July’s, it could actually be more fatal because it will last longer.

She said: “This heatwave might not break any records for maximum temperatures, but it might actually cause more deaths.

“We know that the most dangerous heat conditions are caused when people, particularly those with underlying health conditions, have no respite from the heat for days and nights on end.”

The unusually hot weather will see a continued dry period for the country, resulting in parched reservoirs and consequential water shortages.

Residents in Oxfordshire village have already run out of water forcing Thames Water to dispatch water tankers and bottled water to the area as the country faces a growing spectre of drought.

The arid weather has also prompted more hosepipe bans across the country as water companies urge residents to control their usage.

Thames Water is the latest company to enforce the ban: “Given the long-term forecast of dry weather and another forecast of very hot temperatures coming this week, we are planning to announce a temporary use ban in the coming weeks.”

And the dearth of water only exacerbates the surge of devastating wildfires which have begun to reemerge this week as the mercury soars upwards.

Dozens of firefighters tackled a huge blaze near the Queen’s Sandringham estate in Norfolk on Tuesday.

And the London Fire Brigade (LFB) posted numerous warnings about fire safety after attending a large grass fire in Enfield.

In the last heatwave, the fire service were faced with the busiest day since World War II as the scorching heat sparked several wildfires across England.

LFB tweeted: “Last year, we attended the lowest number of deliberate grass fires in 20 years, but we’re concerned this could spike as the hot weather continues.

‘Out of the frying pan, into the fire’: Top predators could ‘trap’ themselves trying to adapt to climate crisis 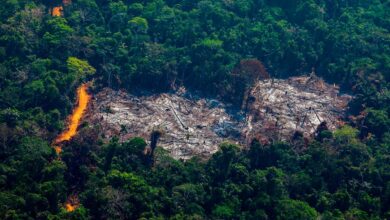 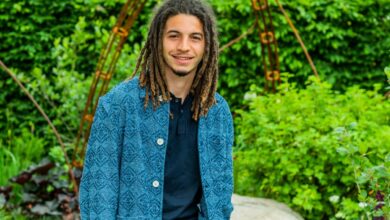