The general secretary of the Rail, Maritime and Transport union (RMT) urged the nation to “wake up” to the impact of the government’s borrowing-fuelled tax cuts, as cost of living protests raged across the UK.

“Everyone in this country need to make the Tory party wake up, not just because of this railway dispute but because of the rampant, radical, libertarian anarchism come out of No 10 and No 11 at the moment,” Mr Lynch told LBC Radio.

The union chief accused the chancellor of “wrecking the markets and the prospects of many people in the country” – arguing that the Truss government had “no mandate” for the £45bn of tax breaks which have raised fears of major austerity cuts ahead.

Mr Lynch added: “Barely anyone in this country had heard of Liz Truss at the last election, and Kwasi Kwarteng was more or less an obscure academic – he should have gone back to that.”

Members of the RMT, Aslef, Unite and the Transport Salaried Staffs’ Association (TSSA) on Saturday staged the latest 24-hour walkout in a long-running dispute over pay, jobs and conditions.

Mr Lynch – who said it was an “outrage” that some railway bosses were “raking in” around £2m a year while workers saw pay squeezed – has written to new transport secretary Anne-Marie Trevelyan, urging her to take “urgent steps to allow a negotiated settlement”.

The union leader also claimed that ministers plan to shut every ticket office in Britain as well as removing guards from trains. The Department for Transport insisted no final decision has been taken on ticket offices.

Saturday also saw thousands of people take to the streets at dozens of rallies staged by the cost of living campaign groups Enough Is Enough and Don’t Pay UK – which saw some burning their energy bills in protest at sky-high costs.

Don’t Pay UK – claiming to have 200,000 pledges from people prepared to stop paying gas and electricity bills – staged rallies as the energy price cap was lifted, taking the average annual household energy costs to a record £2,500.

Protesters, some of whom carried banners which said ‘Can’t afford to live’, were seen throwing bills into controlled fires inside bins during the day of “national action”.

One protester, who gave his name as George, criticised the Tory government’s lack of “fiscal budget responsibility” along with their record on fossil fuels.

“I think no government can run if it’s spending more, like vastly more, than it’s bringing in. That can’t carry on forever.” He added: “I sound like David Cameron when I say that.”

Meanwhile, thousands of people joined a march in Cardiff in favour of Welsh independence, organised by All Under One Banner Cymru (AUOB) and Yes Cymru.

“We are big enough. We are strong enough. And we will fight for this,” actor Julian Lewis Jones, who plays Boremund Baratheon in the Game of Thrones prequel House of The Dragon, told the crowd. 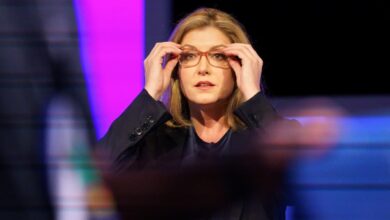 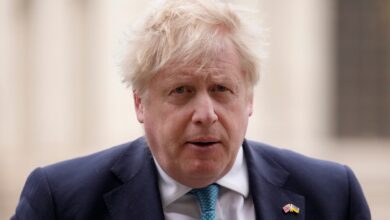