A five-year-old boy was murdered by his mother, step-father and a teenager before his body was dumped in a river “like fly-tipped rubbish”, a court has heard.

Logan Mwangi, described in court as a “cheerful” and “kind” child, suffered 56 “catastrophic” to his head, face, torso, arms and legs before his death last summer, a jury at Cardiff Crown Court was told.

His body was found dressed in mismatched pyjamas in the River Ogmore, near his home village of Sarn, South Wales, on 31 July 2021.

Prosecutor Caroline Rees QC said the young boy’s injuries were from “blunt force trauma”, with experts saying they were more consistent with a fall from great height or high speed car crash.

Logan’s mother Angharad Williamson, 30, her partner John Cole, 40, and a 14-year-old boy, who cannot be named for legal reasons, are charged with murdering the youngster between 28 July and 1 August.

All three are also accused of perverting the course of justice, including moving Logan’s body to the river near Pandy Park, removing his clothing, washing bloodstained bed linen, and making a false missing person report to police.

Ms Williamson and the youth pleaded not guilty to both offences, while Mr Cole denied murder but admitted perverting the course of justice.

Both adults were also charged with causing or allowing the death of a child, which they both denied.

Ms Rees said it was the prosecution’s case that Logan had been submitted to a “brutal and sustained assault” by John Cole and the then 13-year-old boy on 30 July while he was “hidden from view, behind closed doors” in the family home in Lower Llansantffraid.

She told the court: “The prosecution’s case is that Logan was murdered and each of these three defendants played their part…”

Ms Rees said Ms Williamson had done nothing to prevent or report the attack on her young son, not even disclosing what had happened when a social worker visited the house on the same day.

The teenager, who had previously made “repeated threats that he wanted to kill Logan and wanted him dead” was described by Ms Rees as a “complex, troubled and violent boy” who had been trained in the martial art of Muay Thai, also known as Thai boxing, to green belt level.

The jury were shown CCTV footage of Mr Cole and the teenager leaving the family home in the early hours of 31 July.

Mr Cole was filmed carrying something in his arms, which he later admitted was Logan’s lifeless body.

The pair walked across the river and along a path to the spot where Logan’s body was found, the court was told.

Mr Cole and the boy then returned to the property before heading out again, this time to dispose of Logan’s bloodied and torn dinosaur pyjama top, the court heard.

During this time, a light can be seen switching on and off in Logan’s bedroom, which the prosecution said proves Ms Williamson was awake and knew what had happened to her son.

Ms Rees told the court evidence from Ms Williamson’s mobile phone, which showed she was awake in the early hours of the morning – after the time she told police she had gone to sleep – also proves her involvement.

Ms Williamson is said to have struggled to raise Logan in the lead up to his death, with her “motherly bond” with her son “significantly fractured” during his time in self-isolation, Ms Rees said. 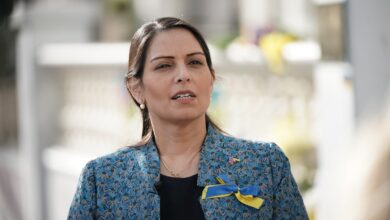 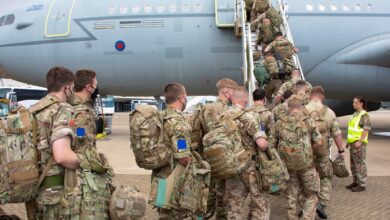 Around 8,000 British troops to take part in biggest deployment in eastern Europe since Cold War