When the game is on the line, you turn to your stars, so it was only right that Matthew Stafford, Cooper Kupp and Aaron Donald combined in the closing seconds at SoFi Stadium to capture Super Bowl 56 for the Los Angeles Rams. The wisdom of risking the future of the franchise, after haemorrhaging draft picks and stretching the salary cap over a number of years, was questioned at times. But a dramatic drive culminating in a Kupp touchdown was paired beautifully with the ferocity of Donald on defense to cruelly deny Joe Burrow and the Cincinnati Bengals in a thrilling game.

It felt like destiny for so long for the Bengals, thriving in a first Super Bowl appearance in 33 years. Zac Taylor magnificently rallied his group after an ominous start when his gutsy call on fourth down backfired in their first possession. The gift was gladly gobbled up by Stafford and the rejuvenated Odell Beckham Jr – a symbol of this Rams era after a mid-season move following a turbulent spell with the Browns. The flashy OBJ seen with the Giants returned and a slick route enabled him to snatch the ball for the opening score of the game.

But as demonstrated in this fairytale run, the Bengals refused to blink and swiftly replied with Burrow heaving a pass deep to Ja’Marr Chase. The rookie spun Jalen Ramsey before clawing at the ball under control with one hand to collect a 46-yard completion.

First Beckham Jr, then Chase, it was now time for the wide receiver of the entire 2021 season to emerge: Kupp. Fresh from a legendary triple crown (leading the league in receptions, yards receiving and touchdowns), he emphasised how his greatness extends to the play-offs. Revelling in a maiden Super Bowl appearance after a torn ACL cruelly deprived him of any involvement three years ago, Kupp secured a comfortable touchdown catch early in the second quarter – joining Larry Fitzgerald as only the second player in NFL history to register one touchdown reception in four games within a single postseason.

With the Rams carving their way downfield at ease, Taylor was forced to dig deep into his bag of tricks, sprinkling some magic over the SoFi field. Running back Joe Mixon briefly froze, digging his boots into the turf after receiving a toss from Burrow before flicking the ball up and over the Rams’ coverage to Tee Higgins in the end zone for the six-yard touchdown.

But the Rams’ momentum and the renaissance of Beckham Jr came to a shuddering halt after an innocuous fall for the star receiver. Having just tied his total touchdowns (seven) from his spell in Cleveland with the Rams, Beckham Jr’s premature exit deprived Stafford of one of his favourite targets and breathed fresh life into Cincinnati.

Nonetheless, the Rams led 13-10 at the break, a significant score given head coach Sean McVay’s 47-1 record when leading at half-time.

But Burrow had other ideas, immediately, having proven lethal from deep in the regular season with 12 completions of 50+ yards, more than any quarterback in the last 20 years. This avid chess fan whose chess.com account was active on Sunday, Burrow’s sharp mind quickly calculated where the space was in behind, but only due to a sneaky play from Higgins. The referees sheepishly kept their flags in their pockets as Higgins took a swipe at Jalen Ramsey’s face mask, creating enough separation to gather the ball and convert a 75-yard bomb.

The Rams appeared stunned and Stafford dished out his second interception of the game. A wretched run after Beckham Jr’s injury was extenuated across five possessions: Interception, punt, interception, field goal and punt.

But the Bengals could not seize that required ruthless streak to put the game out of reach, partly due to the narrative surrounding the Bengals’ offseason a year ago. The dilemma over whether to protect Burrow by using their precious first-round pick on a huge lineman or to gift him a shiny toy on offense in Chase. The temptation of the latter proved too much and despite a record-breaking rookie season from Chase, Burrow has been left battered and bruised. And that theme continued deep into the Super Bowl with their quarterback sacked seven times, matching a record suffered by Roger Staubach during Super Bowl 10.

A hobbled Burrow was left writhing in agony, clutching his knee, with a four-point lead and seven minutes to erase. But each offense stuttered until that telepathic connection between Stafford and Kupp reemerged, aided by a string of flags to eat into the clock and hand the Rams fresh hope near the goal line. With six targets leading into the go-ahead score for Kupp, McVay dialled up six more, snatching back the lead with 85 seconds remaining. The Offensive Player of the Year carved his name into history with the most catches in a single postseason, enough to earn the MVP award after the drama that would follow.

But with two timeouts remaining, that was an age for Burrow and co. to pull off another late victory. Ramsey was beaten once more by Chase, who collected 17 yards. But with everything on the line, it was the turn of another Rams superstar to come through. Enter Donald.

The destructive nature of this transcendent player punctured a hole in the Bengals’ line again, denying Burrow on fourth and one and completing one of the most lavish projects in NFL history. Finally, the Lombardi Trophy is back in Rams’ house. 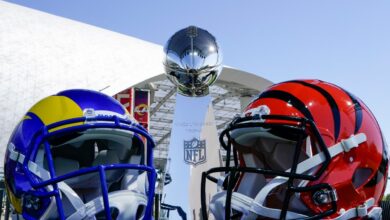 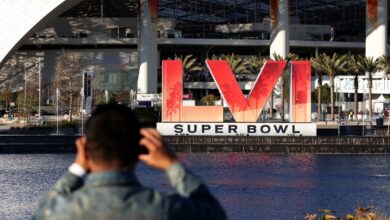