Where to go next must be an increasingly fraught question for Louis Theroux. His early work relied on his being an unknown quantity. Not familiar with his style, his subjects spoke freely, repaying the presenter’s probing curiosity with eye-opening disclosure. The issue he has had for some years now is that everyone knows who he is. That’s Louis off the telly, they think. It’s a kind of documentary quantum problem. Not only do the interviewees behave differently under observation, but they behave differently specifically for Louis Theroux, Britain’s most famous documentarian.

For his new three-part series, Forbidden America (BBC Two), looking at extreme subcultures in the US, Theroux has turned his fame to his advantage. His first subject is the young far right, as seen through some of its most influential bloggers and streamers. These guys – and one woman – hate mainstream journalists, but love publicity, so welcome Theroux in part because he is the famous guy from the BBC. One of them, Beardson Beardly, turns up for the interview wearing a T-shirt with three pictures of Theroux on it. After Theroux shows him footage of him giving a Nazi salute, Beardly terminates the interview in a fury and goes straight down to his studio to broadcast against him. Later another streamer, Baked Alaska, broadcasts Theroux live. His followers make donations. Theroux, as he acknowledges, is part of the show, helping to make them money.

The scariest subject is perhaps Nicholas J Fuentes, a 23-year-old commentator who has built a large following over social media for his videos espousing racist, misogynist views. “I just want you to know that I fundamentally disagree with what you promote and with what you stand for,” Theroux says, “but I’m here because I’m curious about you.” Fuentes is perfectly suited to the internet age, a quick-talking charlatan who makes money by accepting donations for answering viewers’ questions. He’s an outright white nationalist, who spews his antisemitic, racist, homophobic, misogynistic beliefs with the charming patter of a gameshow host.

Fuentes’s outriders are mainly recruited through social media and gaming. Aside from the reprehensible individuals, who are on a spectrum from grifters to true believers, the real enemy here is the internet. These young men and woman grew up in the smartphone era. They couch all their statements in the irony of the permanently online, a slippery vernacular where everything is “trolling” or playing devil’s advocate and nobody can ever be held responsible for the things they say, even as they lead to actions in the real world. When Theroux confronts them, they either say it was a joke or react with extreme hostility. Socratic dialogue is not good for clicks.

Theroux plays a video Alaska filmed after the New Zealand terrorist attack of 2019. “We need to start educating people on the difference between internet culture and reality before things go way out of hand, like they did in New Zealand,” he says, in the video, with apparent reflection. It was already too late then. It’s even more too late now. Soon he was back to his old abusive tactics. After all, streaming is his living.

It’s too easy to dismiss these people as clowns. When Theroux has investigated right-wing American figures before, it was with an open mind. Even when he disagreed with them, he could usually find points of sympathy. There’s no both-sides here; it’s Louis vs them, and by extension it’s us vs them. A depressing, eye-opening vision of where things are headed.

Obi-Wan Kenobi’s Moses Ingram: ‘If you’ve got talking droids and aliens but no people of colour, it doesn’t make sense’ 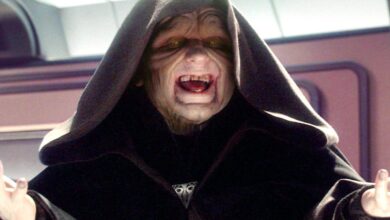