The parents of an autistic man who was discovered “close to death” after being locked in an attic without food have both been jailed for six years.

His mother, Lorna Hewitt, 43, and step-father, Craig, 42, were today sentenced after being found guilty of falsely imprisoning Matthew Langley, 22, at their home in Sheffield, South Yorkshire.

The court heard that Matthew was severely dehydrated when he was found inside the attic room, which was littered with his faeces and vomit, the smell of which had attracted flies. A key had also been left outside of the door.

Judge Michael Slater condemned Lorna Hewitt’s actions as “a grave abuse of trust between a mother and her son” during the sentencing at Sheffield Crown Court on Friday.

He added: “You were the primary carer for Matthew with all his difficulties and challenges.

“It makes it all the more inexplicable to me that for those seven months you failed to provide him with the support and provision of food and drink that he craved and needed.”

The couple had previously denied keeping the 22-year-old locked up at their home for the duration of seven months. But the Hewitts were found guilty following the trial.

They were also convicted of causing or allowing a vulnerable adult to suffer serious physical harm.

The severely underweight and dehydrated Matthew was found by paramedics “with his life hanging in the balance”, the court heard.

Prosecutors said the ambulance was called to the Hewitt’s home in Sheffield in the early hours of 2 June 2020. Matthew was then admitted to an intensive care unit in a “pitiable state”.

Nicholas Campbell QC, prosecuting, told the court he was found to have abrasions on his body, likely because he had been moving around on all fours.

“They were so high they could shut down his brain and kill him. Anything above 145, there is a real chance of death.

“The Home Office pathologist examined the injuries and said the abrasions and bruises were consistent in his view with Matthew having been crawling on all fours over objects in his path.”

But Mr Campbell told the court that Matthew made a good physical recovery thanks to the hard work of medical professionals.

When he was discharged from hospital he weighed 55kg.

A report from psychologist Rekha Davis read out in mitigation said that Lorna Hewitt, Matthew’s mother, was “vulnerable to manipulation and exploitation” and was “easily suggestible”. 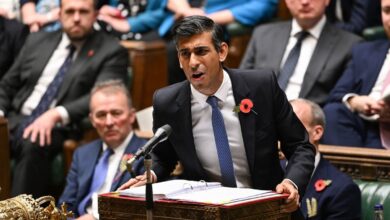 New demands for election as Rishi Sunak tears up pledges

‘Abuse of power’: Boris Johnson blocks Commons bid to force him from No 10 immediately

‘Mistakes were made’: Sunak vows to ‘fix’ Truss errors and earn UK’s trust