The government must pump tens of billions of public money into “gigafactories” to produce batteries for electric vehicles to secure the future of the UK car industry and create as many as 33,000 jobs, a new report has found.

As the world switches from petrol and diesel, the UK needs to scale up battery manufacturing capacity from the current 2 gigawatt-hours per year (GWh/a) to 80 by 2030 in order to safeguard up to 90,000 jobs in the automotive sector, found the report from thinktank Common Wealth.

And the report, seen by The Independent, warned that the state will have to deliver the lion’s share of an estimated £100bn investment over the next eight years or risk thousands of high-skilled jobs being “offshored” to other countries.

With the private sector committed to a total of £12bn of investment and the government so far chipping in just £1bn, the report concluded that an additional £10.9bn is needed each year until 2030.

Ministers have previously indicated that they want the private sector to “lead the charge” towards mass ownership of zero emission vehicles. But today’s report warned that leaving investment decisions to the market will expose the UK to the risk of offshoring of capacity and jobs.

It recommended that at least half – and possibly the majority – of the cash needed should come from the government and should be front-loaded to help Britain catch up with major EV producers like Germany and China.

This would allow the UK to secure a public equity stake in one of the big industrial growth sectors of the future, anchoring jobs in Britain and ensuring that the returns generated from investment are passed on to the taxpayer rather than private investors.

Investment on this scale could create 33,200 new jobs, said the report. And a controlling public equity stake would allow the government to direct production of lithium-ion batteries for buses and trams to help shift the balance towards clean public transport options.

“Public ownership in key areas can underpin the democratic planning of the transition to a greener transport system, ensuring unionised jobs in manufacturing are secured rather than offshored,” said Common Wealth researcher Khem Rogaly, who co-authored the report with Adam Almeida.

“This can reverse the legacies of de-industrialisation in UK manufacturing sectors and help keep the wealth produced from battery production in the pockets of workers and the public.”

As part of its plans to deliver net zero carbon emissions by 2050, the government will end the sale of new petrol and diesel cars by 2030, forcing a mass shift to electric models over the coming years.

But the UK currently has only one gigafactory, in Sunderland, which produces batteries totalling 2 GWh/a to Nissan. Planning permission has been given for a second plant in Sunderland and another in Coventry, while Britishvolt is constructing a battery factory in Blyth.

The report found that this leaves a “significant shortfall” in domestic battery manufacturing, with total estimated production from approved projects reaching just 45 GWh/a by 2030.

And it warned that without more factory developments, there was a risk of government cash being spent on research and development in Britain, only for production to take place overseas.

The automotive sector employs 797,300 people across the UK, including 156,400 in manufacturing, which generates £15.3bn for the national economy.

Without an industrial strategy to secure a managed transition to electric vehicle production, some 90,000 jobs in the sector will be at risk by 2030, the report found.

A survey of Unite union members in the industry earlier this year found almost half (48.6 per cent) felt insecure in their jobs.

But the Common Wealth report found that a successful transition to EV production could protect the existing workforce while creating a further 10,400 secure and unionised jobs in the Wes Midlands, 4,600 in the North West and 5,900 in the North East by 2030.

The thinktank’s director Mathew Lawrence said: “The UK’s auto sector is at a critical juncture. Ambitious action – including public investment and public stakes in battery production – can secure a just transition to an EV future. 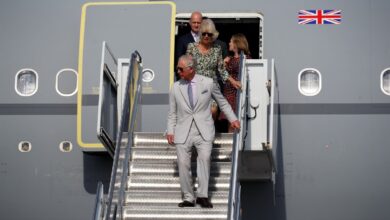 ‘We couldn’t cool down’: Firefighters on a ‘non-stop’ day of blazes and what they expect from climate change