Parent company Meta said on Wednesday that the ex-Lib Dem leader has been made president of global affairs – reporting directly to CEO Mark Zuckerberg.

Mr Clegg has worked for Facebook since October 2018, when he has done public relations for the social networking company.

In a post on Facebook Mr Zuckerberg said he could not “think of anyone better placed to represent us and help shape the future of internet policy than Nick”.

“For the last three years, Nick has managed some of the most complex issues our company faces — including content policy, elections, the establishment of the Oversight Board, and more,” he said.

“Nick will now lead our company on all our policy matters, including how we interact with governments as they consider adopting new policies and regulations, as well as how we make the case publicly for our products and our work.

“Given the expanded scope of this new role, he will now report directly to me as well as Sheryl [Sandberg]. As Nick takes on this new leadership role, it will enable me to focus more of my energy on leading the company as we build new products for the future, and it will support Sheryl as she continues to focus on the success of our business.”

In politics Mr Clegg took his party into coalition with the Conservatives, after winning a record high share of the party. But his tenure in government won little admiration from the public, who booted him out as an MP at the 2015 election and reduced his party to a rump of just eight MPs, down from 57. 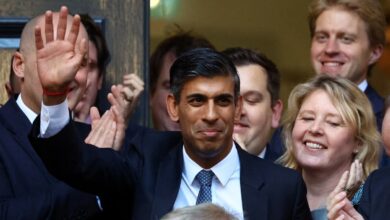 Rishi Sunak rules out election as 202 MPs vote him in – but almost 400,000 sign The Independent’s petition

Sabina Nessa: Family of murdered teacher brand killer ‘animal’ who had ‘no right to touch her’