Oleksandr Usyk’s rematch with Anthony Joshua will reportedly be free to watch in Ukraine.

The pair will go head to head again on 20 August, as Joshua looks to regain the belts from Usyk in Jeddah, Saudi Arabia.

Usyk’s promoter Alex Krassyuk told talkSPORT on Thursday that the rematch will be free to watch in Ukraine on state TV, the Megogo platform, and Usyk’s YouTube channel.

Per Krassyuk, Usyk tried to buy the rights to air the fight in his native Ukraine, which has been under invasion from Russia since February, and the rights were subsequently gifted to the southpaw by the relevant decision-makers in Saudi Arabia.

Usyk, 35, returned to Ukraine earlier this year to aid nis nation’s defence against the ongoing Russian invasion, before leaving to begin training for his rematch with Joshua, 32.

Joshua avenged that defeat by outpointing the Mexican-American in Riyadh, Saudi Arabia at the end of that year, regaining the heavyweight titles that he later dropped to Usyk. 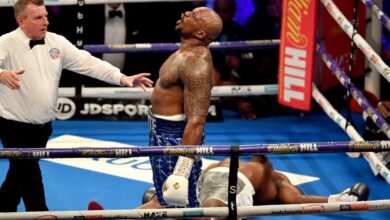 Tyson Fury: ‘I will return when Anthony Joshua loses, but it’s gonna be very costly’