Ollie Robinson has been recalled to the England Test squad named for the first two Tests of the series against South Africa.

The Sussex seamer has struggled with injuries and illness this year after a breakthrough 2021, missing England’s three Tests against the West Indies in the spring and absent from the squads to face New Zealand and India earlier this summer.

After a two-month absence from competitive action, Robinson returned for Sussex in the county Championship last week, finishing with match figures of 9/104 against a strong Nottinghamshire side.

He will continue his comeback for the England Lions against South Africa next week at Canterbury.

Robinson replaces Jamie Overton in a 14-man squad named for the opening two encounters of a three-match series which begins at Lord’s on August 17.

Overton has been ruled out for up to six weeks after suffering injuries to his foot and hand.

In another blow to England’s depleted fast bowling resources, the Surrey all-rounder will miss the entirety of The Hundred, and has been replaced in the Manchester Originals squad by Essex’s Paul Walter.

Kent wicket-keeper Sam Billings is omitted from the squad in the only other change to the side that beat India at Edgbaston at the start of July, with Ben Foakes fit to return to again take the gloves.

Ben Stokes will captain the side with the batting order set to remain unchanged.

The uncapped Harry Brook is again included as the reserve batter, while Craig Overton is also yet to feature this summer and adds seam-bowling depth.

“After an excellent start to the summer under Brendon McCullum and Ben Stokes, we’re looking forward to an exciting Test series against a strong South Africa side,” Mo Bobat, ECB Men’s Performance Director, said.

“The selectors have picked a squad for the first two Tests at Lord’s and Emirates Old Trafford with continuity in mind.

“It’s good to get Ollie Robinson back in the mix after his recent injury. He will continue his progress by playing for the Lions against South Africa in a four-day match at Canterbury next week.”

The Lions squad for the tour match will be announced at the end of this week.

‘He had his Jonny eyes on’: England teammates predicted Bairstow second Test heroics 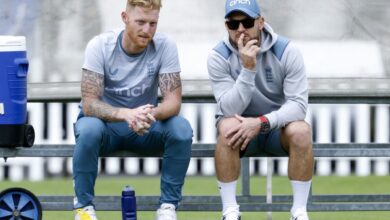 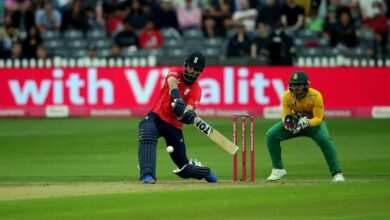