Police have been asked to investigate a rash of online death threats made against Keir Starmer by right-wing extremists in the wake of Boris Johnson’s false claim that he “failed to prosecute” the paedophile Jimmy Savile.

A dossier of messages from apparently idenitifiable users of the Telegram app has been sent to pollce by the Centre for Countering Digital Hate.

Among them were calls for the Labour leader and shadow foreign secretary David Lammy – who were accosted by a mob shouting “paedophile protector” and “Savile” as they walked through Westminster last week – to be “executed”.

Mr Johnson’s smear has been widely condemned as an attempt to distract attention from his role in the Partygate scandal, which is currently being investigated by police.

The prime minister was forced to clarify that he was aware Sir Keir played no part as director of public prosecutions in the decision not to prosecute Savile, as was found by a QC-led independent inquiry at the time. However, he has so far refused to apologise.

Anglican bishop of Liverpool Paul Bayes said that Johnson should take “serious stock of his position, adding: “I do not believe that was an honest statement, and I think he should be ashamed of it.”

One commenter said Starmer and Lammy should be detained “until preparation can be made for their execution”, while another said the Labour should be “linched [sic] from the nearest lamppost”. Another said: “The sooner they’s all dead the better. Hang the f***ing lot of them.”

“Two sitting MPs [Jo Cox and David Amess] have been murdered in the last six years,” he said. “Telegram has made a calculated business decision to allow users to egg each other on to violence against named politicians with zero consequences.”

A Labour source said: “Of course, extremists of all stripes don’t like Keir. He spent years helping to put them and their ilk in prison.”

Sir Keir has said that he had never faced accusations of being a “paedophile protector” before Johnson’s comment.

“If others want to argue that this is unconnected with precisely what the PM said one week before, then let them make that case,” he said in the wake of the incident. “But they’ll never persuade me that there is no link.”

Scotland Yard was unable to confirm that an investigation had been launched into the alleged threats.

Mr Lammy earlier this week told The Independent that the PM’s “worrying” comments echoed Donald Trump’s tactic of firing up supporters with unsubstantiated slurs sourced from the political extremes.

“The only modern-day example of a leader pulling stuff from the fringe into the centre is Donald Trump,” said the shadow foreign secretary.

“And we saw where that led. It led to the horrendous, horrific assault on the Capitol. And I’m afraid there were elements of that in some that were gathered on the Embankment last week.” 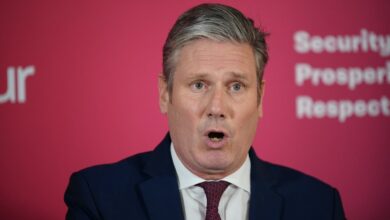