The Duke and Duchess of Sussex have reportedly been uninvited from the grand state reception hosted at Buckingham Palace on the eve of the Queen’s funeral – a development that is said to have left people close to the couple “baffled”.

Prince Harry and Meghan were reported to have received an invitation to the event earlier this week.

However, the Sussexes are now not expected to join the coming-together of world leaders, foreign dignitaries and royals after some palace officials raised concerns, arguing the event should be limited to working members of the royal family, the Daily Telegraph reported.

Sources close to the couple were apparently pleft baffled by the mixup, according to the report, while palace aides continued to “insist that they were not invited”.

The state reception – the night before the Queen’s funeral – is being hosted by King Charles and Queen Consort Camilla on Sunday.

The VIP reception will be attended by more than 500 world leaders, diplomats and international royals who will also be greeted by William and Kate, the new Prince and Princess of Wales.

The US and French presidents Joe Biden and Emmanuel Macron will be among those attending the event, with both arriving in the UK the day before the Queen’s state funeral on Monday.

This is not the first time confusion has arisen over the duties of the Duke and Duchess of Sussex, whose relationship with the wider royal family was strained by the decision to give up their positions as working royals move to California.

There were reports of similar mixed messaging over Prince Harry’s right to wear a military uniform for when he walked behind the Queen’s coffin in procession.

The Duke of Sussex, who served 10 years in the British Army, wore his military medals pinned to his morning suit while walking in a procession alongside his father, the King, his brother, the Prince of Wales, and other members of the royal family.

Harry was also prohibited from saluting the coffin like his brother and father, and instead simply bowed his head.

But it was revealed on Friday that the King has given Harry permission to wear a military uniform for a royal vigil with his cousins at the Queen’s coffin on the evening of Saturday 17 September. 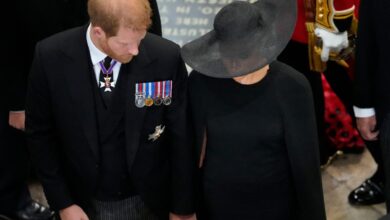 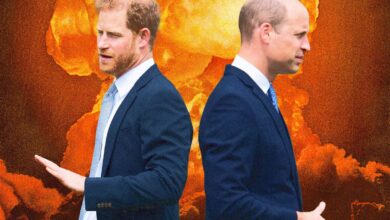 Come at me, bro: Why many can relate to William and Harry’s sibling rivalry 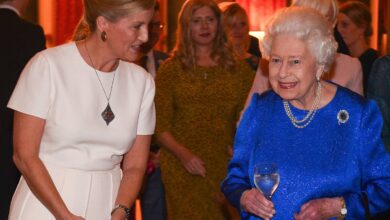 From scandal to senior royals: How Sophie and Edward became the Queen’s favourites