Princess Eugenie and her husband Jack Brooksbank are expecting their second child, it has been announced.

Buckingham Palace issued a statement on Tuesday (24 January) and said: “Princess Eugenie and Mr Jack Brooksbank are pleased to announce they are expecting their second child this summer.

“The family are delighted and August is very much looking forward to being a big brother.”

The couple are parents to two-year-old August Philip Hawke Brooksbank, who was born on 9 February 2021. August is currently 12th in line to the throne, and Eugenie’s second child will become 13th in line.

Eugenie is the eldest daughter of the Duke and Duchess of York. She married Brooksbank in 2018 at St George’s Chapel.

The royal also announced the news with a sweet photograph of August hugging her pregnant belly posted on Instagram. She is pictured standing outdoors and beaming as her son, a burgundy winter hat, matching trousers and wellies, embraces her around her thighs and stomach.

She wrote in the caption: “We’re so excited to share that there will be a new addition to our family this summer.”

The new addition will be the first of the late Queen’s great-grandchildren to be born since her death, and will arrive in King Charles III’s coronation year.

Depending on the baby’s gender, they will not hold a title and will be a plain Miss or Master.

August was born at the exclusive Portland Hospital in central London on February 9 2021.

He made an appearance at the platinum jubilee pageant celebrations last year wearing a union flag jumper as Eugenie bounced him up and down on her knee as they sat in the royal box.

The happy news comes after Eugenie gave an interview at the World Economic Forum in Davos, during which she said August will be an “activist” for climate change at the age of two.

She also spoke of how becoming a mother “totally changed” her views on the environment and now makes decisions in her household based on “what [August is] going to be able to look at and do, and how he’s going to live his life”. 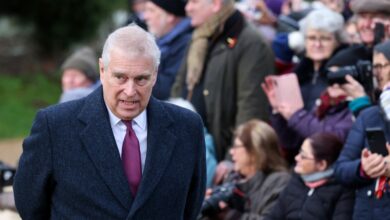