Newly re-elected French president Emmanuel Macron narrowly avoided being pelted by cherry tomatoes as he waded through a boisterous and packed market crowd.

The attack led to shouts from onlookers, and a security guard shouted “projectile” before opening an umbrella to protect the president from further attacks.

His security detail steered him to cover under a nearby market-stall parasol where he sheltered until things calmed down.

Mr Macron was on a walkabout in Cergy-Pointoise, northwest of Paris, where almost half of voters opted for far-left candidate Jean-Luc Mélenchon in the first round of the presidential election this month, leaving the centrist president trailing on less than a quarter of votes.

“I have come to say that I have heard the voices of each and every one, and that I will continue to be engaged with the neighbourhoods that are most in difficulty … every day,” he said before the attack.

About six tomatoes appeared to fly over his head and bounce off the arm of two men beside him.

The president initially seemed oblivious to the near-miss.

The high level of excitement as he shook hands and talked to people in the cheering crowd for some two hours was unusual.

Another snippet of video, shot from a different angle just after the tomatoes were thrown, showed a bystander clambering onto a table or another object and hurling himself backward in the direction of the gaggle of people around Macron.

The man appeared to throw a wayward punch as he flew through the air. There were screams as he landed hard on the crowd and then hit the ground.

Mr Macron, ostensibly unharmed and unperturbed, continued his walkabout, talking to while campaigning ahead of France’s June legislative election.

He comfortably beat far-right rival Marine Le Pen in Sunday’s election run-off and is now looking to maintain his party’s majority in the lower house of parliament. 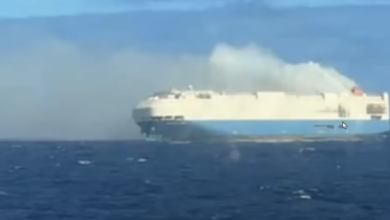