Vladimir Putin’s threats of nuclear retaliation against the West were today blasted by Liz Truss as a desperate attempt to justify the “catastrophic failure” of his invasion of Ukraine.

Ms Truss’s comments came after US president Joe Biden accused Putin of making “overt nuclear threats” to Europe and vowed that Washington will “stand in solidarity” against Russian aggression.

As world leaders gathered for the United Nations General Assembly in New York, Mr Putin sparked fears of a spiral into nuclear conflict by warning that Moscow was ready to use “all the means at our disposal” in its defence and adding: “It’s not a bluff.”

The Russian leader, who has not travelled to New York, ordered the mobilisation of 300,000 reservists to bolster his depleted invasion force and confirmed plans for referendums on joining Russia in the occupied Ukrainian regions of Luhansk, Donetsk and Kherson.

But Biden dismissed this weekend’s votes as a “sham” and told the UN that Moscow had “shamelessly violated” the international body’s founding principles by invading a sovereign neighbour and acting with “reckless disregard” for its nuclear responsibilities.

In a speech to the General Assembly in the early hours of Thursday, UK time, Ms Truss was due to denounce Putin’s comments as “sabre-rattling” and say that the “strength of collective purpose” shown by the international community over Ukraine must not wane.

“In Ukraine, barbarous weapons are being used to kill and maim people,” she was expected to say. “Rape is being used as an instrument of war. Families are being torn apart. And this morning we have seen Putin desperately trying to justify his catastrophic failures.

“He is doubling down by sending even more reservists to a terrible fate. He is desperately trying to claim the mantle of democracy for a regime without human rights or freedoms.

“And he is making yet more bogus claims and sabre-rattling threats. This will not work. The international alliance is strong – Ukraine is strong.”

Restating her commitment to increase UK spending on the military from 2 to 3 per cent of GDP by 2030, she announced she had ordered an update to last year’s integrated security and defence review to take account of the heightened “threat of coercion from authoritarian powers like Russia and China”.

A shift towards home-grown nuclear and renewable energy would ensure that the UK “cannot be coerced or harmed by the reckless actions of rogue actors abroad”, she said.

And she added: “In the face of rising aggression we have shown we have the power to act and the resolve to see it through. But this must not be a one-off.

In a TV address early on Wednesday, Mr Putin announced the partial mobilisation and accused the West of “nuclear blackmail”.

He alleged, without providing any evidence, that “leading Nato states” had discussed the use of weapons of mass destruction against Russia, and warned that his country possesses “various means of destruction” to deploy in response.

“If the territorial integrity of our country is threatened, we will use all available means to protect our people,” said Putin. “This is not a bluff.”

The conflict in Ukraine was “chosen by one man, to be very blunt”, he said.

“President Putin has made overt nuclear threats against Europe, and a reckless disregard for the responsibilities of a non-proliferation regime. Now Russia is calling up more soldiers to join the fight, and the Kremlin is organizing a sham referendum. 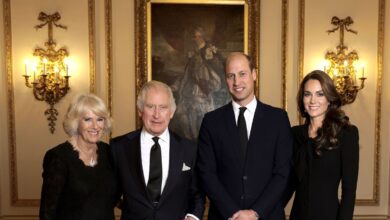