A show of what’s to come, and also a throwback. Brazil illustrated why they are favourites for this competition with a commanding victory, but inherent to that was how Richarlison offered a first truly magic World Cup moment from the Selecao in perhaps two decades.

His sensational goal, that was at once deft and fluid but also thunderous and definitive, was the sort of play that created the country’s football fame in the first place; that sparked the imagination… that made you want to watch them.

It was up there with Pele’s dummy, Josimar’s swerve and Ronaldo’s swivel. It was also the crowning moment for both this 2-0 win over Serbia and Richarlison’s fine individual performance, as the Tottenham Hotspur striker scored both goals.

Given the problematic nature of this World Cup, it is worth pointing out that Qatar now has the benefit of forever being associated with a moment that will be replayed for years; that will become part of the World Cup’s lore.

In this case, it might well become a core part of Brazil’s rebirth and reclaiming of a trophy they have made their own.

That is the calculation Qatar have made in hosting the tournament. That is the emotional blackmail of this World Cup, and also the simple beauty of football.

No matter what your feelings on this tournament, it is impossible to see that and not have an instinctive emotional response. It was too good to watch, too impressive.

There was first of all the touch at pace to both put the ball under his spell and set it up, and then there was the acrobatic leap to power it into the bottom corner with an overhead.

The Lusail Stadium roared its amazement and approval. Such a performance showed why Brazil may well be back here in four weeks’ time, starting as they mean to finish.

This display wasn’t always so dazzling, and there was plenty of graft to go with the art. That almost made it more commendable, though, Brazil fought and ground their way through an obdurate Serbia to eventually give themselves the space to express themselves.

It wasn’t what Spain did to Costa Rica, but it was almost as impressive in a different way. They had to use all of their guile and – as Richarlison illustrated – their imagination.

If that meant you could never tell what one of Brazil’s attackers was going to try next, but you knew precisely what you’re going to get from Serbia. That was granite-hard solidity.

They immediately went about setting up a defensive fort, held up by the towers of Strahinja Pavlovic, Milos Veljkovic and Nikola Milenkovic. That was an awful lot of Serbia to get past, and around.

Brazil were notably going for long shots from early on, but that wasn’t quite because they couldn’t get close to goal. They clearly didn’t fancy goalkeeper Vanja Milinkovic-Savic, and Neymar almost caught him with a viciously in-swinging corner.

Set-pieces were one of a few moments when Neymar got to stand with some space. Most of his match was spent with three players constantly around him. And, when he finally got free, there was Nemanja Gudelj to absolutely take him out of it with an abrasive challenge.

The only flaw in a defensive unit as robust as Serbia’s is they weren’t so swift on the turn. There were signs from the off that Brazil could finally get through that with pace and intricacy.

Casemiro put Vinicius through with one sublime through ball, before Thiago Silva did similar for Richarlison.

On one of the moments when Milinkovic-Savic felt brave enough to play the ball to Pavlovic’s feet, then, Raphinha was straight on and too quick for him. The forward should have scored or, really, squared it.

Pavlovic did redeem himself minutes later with a superb stretched challenge to deny the same player. It was brilliantly defiant, but also reflected how Brazil were getting closer. Serbia were being pulled this way and that. Alex Sandro smashed the post. Gaps presented themselves.

Liverpool keep heads above the water to hold out Villarreal deluge

‘Special’ Anthony Gordon beginning to show what Chelsea could have had 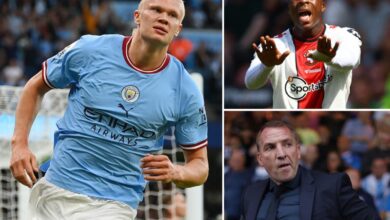 Haaland, Jesus, Bella-Kotchap and more: Rating the best and worst of the 2022 summer transfer window