This was a Six Nations smash and grab match, settled as Scotland found their heads just as England were losing theirs. Marcus Smith’s 17 points looked to have put this young and inexperienced England side on the verge of victory, only to see his side fall apart after his Six Nations debut was brought to a close.

The match between rugby’s oldest rivals was billed as a clash between Smith and Finn Russell, two of the game’s most exciting No 10s, and in a way it was, just not when both fly-halves shared the stage. Smith looked to have steered England into calmer waters with an assured and commanding performance, his breakthrough try the moment where England finally landed a blow after what seemed to be relentless pressure.

What changed in England after Smith’s withdrawal was exacerbated by Luke Cowan-Dickie’s yellow card and resulting penalty try, the game-changing moment to put Scotland within touching distance of a second consecutive victory in this fixture. Russell held his nerve to kick the winning points as a final England foray saw the visitors come away empty handed yet again.

It was the story of the match and in some ways, a reverse of Scotland’s historic win at Twickenham last year. That was an occasion where Scotland controlled the game through their possession but saw little return on the scoreboard. This time around, they controlled England through their defence for the most part, while making the most of their rare attacking opportunities.

The belief that swelled and rose within Murrayfield in the closing moments could also be the sounding drum of a genuine Six Nations bid.

A win against a Wales side in need of a response following their earlier thrashing to Ireland and those hushed whispers could be delivered with more confidence.

If England could only ask for the same. After a troubled and disrupted build-up to these Six Nations, England found themselves within 15 minutes of escaping from the eye of the storm with an opening victory, but letting it slip through their fingers is a bitter blow.

Much of the pre-match discussion had been dominated by talk of who the favourites were, or not. Was Eddie Jones describing Scotland as “red-hot favourites” mind games, or simply an illustration of the fact that the hosts possessed the stronger side on paper. There were few surprises in Gregor Townsend’s team, with eight British and Irish Lions on display, including most of their backline.

Scotland, emboldened by their first victory at Twickenham for 38 years last season as well as wins over France and Australia in the past year, sensed an opportunity to deliver a seismic victory in front of a returning Six Nations home support. Back-to-back wins over England for the first time in almost 40 years beckoned, and as the skies cleared and the gusts settled before kick-off, the enticement of an all-out attacking battle between Smith and Russell did too.

England’s initial attacks came on the ground and through the air. Henry Slade took up the charge at inside centre but Scotland withstood the escalating phases and looked comfortable doing so. When no progress was made, the visitors sent up an array of testing kicks into the corners.

Stuart Hogg spent his first half scurrying back towards his try-line, Duhan van der Merwe was asked to pluck the ball from the skies under pressure, and after doing so Scotland sent the ball straight back and told England to come again. The waves of England attacks stuttered, and Scotland absorbed the blows.

England dominated every category in terms of possession, territory and yards gained, but it was Scotland who led the most important statistic. The opener came out of the blue and from the unlikeliest of scorers. Ben White, thrust into the action as an early replacement for Ali Price at scrum-half, took all of five minutes to score his first Scotland try on his international debut in a slick move on 17 minutes.

White found Hogg who skipped past Maro Itoje and connected with Darcy Graham in stride. The winger powered through and sold Joe Marchant a dummy before handing it inside to White, who was as surprised as anyone to find himself as the opening try scorer. It was a fleeting cameo but a lasting one from the London Irish scrum-half. Another five minutes on, White found himself sat back on the bench as Price returned from his head injury assessment. 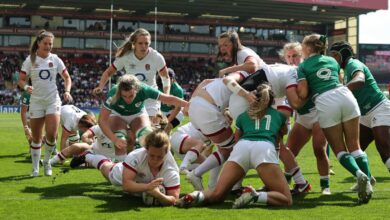 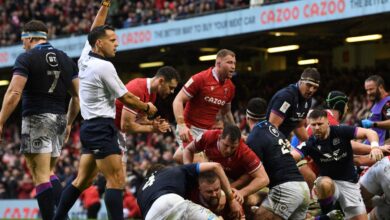 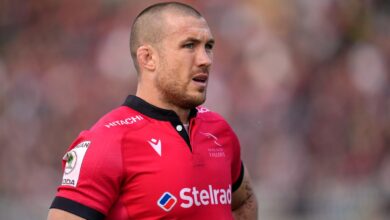 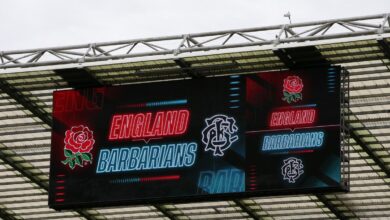